My goodness, I have been such a slacker with blogging this past week!  It has been four days since my last post, a record-breaking amount of time since the summer began.  This is my oath to the blogging world to try and be better.  School is absolutely crazy right now, and I am running around left, right and centre trying to get journalism stories organized before Thanksgiving.  Right now it looks like October may just be the month from hell, but I will try my very hardest to charge on through, treating my hard work with delicious meals every once in a while!

I made this loaf last week.  The reason why the pictures you see below were taken inside was because I made this little baby at 9 p.m. and, by the time the next day rolled around, the majority of it was gone (yes, this was also due to my near midnight snacking, I had a stomach ache).  That being said, no pictures were able to be taken outside, to my great dismay.

This lemon sour cream loaf is actually just Canadian Living’s Lemon Yogurt Loafwith, you guessed it, sour cream.  Why is sour cream in absolutely everything I make nowadays, you ask?  I have no idea, but it is good.  The original recipe called for the use of “balkan-style plain yogurt,” something I have never heard of.  Apparently it’s like a low-fat yogurt or something?  Not too sure.  Whatever, our fridge was crowded beyond belief (I blame all the plastic containers of spinach) and I needed to use up this sour cream.

When Canadian Living says “use parchment paper” in your loaf pan, I definitely recommend you follow their instructions.  Unfortunately for me, our lowly student home had run out of parchment paper  just a few days earlier, and I instead was forced to heavily oil the pan as an alternative.  This worked…sort of.  After the loaf was semi-cool, I could be seen standing over the deep freeze (I use it as a counter), whacking the bottom of that pan like there was no tomorrow.  After a substantial shaking and use of brunt force, the loaf surrendered to my attempts, and plopped nicely down on the cooling rack, with a mere chunk taken out of the bottom.  Needless to say I bought parchment paper the very next day.

Finally, the reason why the surface of this loaf looks like it has reflective properties is because of all the delicious lemon glaze I put on it!  The glaze was just icing sugar and lemon juice, and the loaf soaked it up like a sponge.  Absolute heaven. 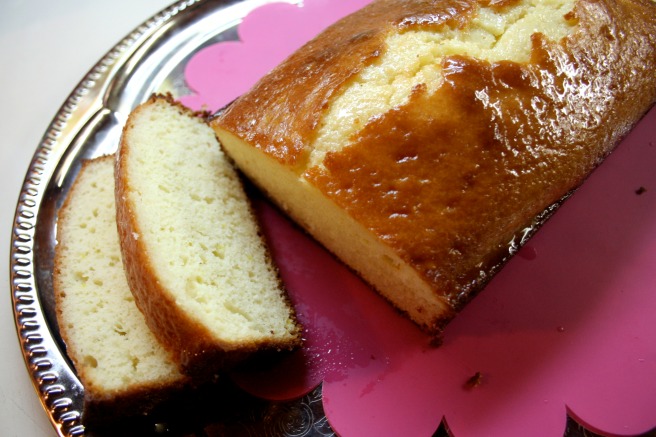