Ladies and gentlemen, the season of summer salads is upon us!

For those of you who were around last summer, you’ll recall that almost every meal I blogged about was some sort of unconventional and delicious salad.  This summer, with a newly discovered (and extremely passionate) love of quinoa, I charge back into the world of refreshingly fast dinners and cool patio meals.

Salads are like the soup of summer.  Just like their warm winter counterpart, you can virtually toss in anything you want, making them the perfect meal to clear out the crisper and dispose of your cheeses (not that I ever need help getting rid of my cheese).

Case in point: In a thrifty manner, I used up leftover spinach, walnuts, asparagus and corn in this meal.

My recipe was inspired by the mouthwatering salad that appears on the July 2011 cover of Canadian Living.  A few adjustments were made here and there, and voila!  A new salad was born, à la Hilary Makes.

PS: I really need to get a BBQ – the original recipe in CL called for grilled chicken, asparagus and corn cobs, all of which I had to fry up on the stove.  Boring!  I’m actually considering whipping out my DIY skills and making my own in the next few weeks.  It can be done.  Barbeque dinners (and patio cooking!) may soon be within my reach.  Or I might just light something on fire.  Fingers crossed for the former.

PPS: I added walnuts to the salad at the last minute (which is why you won’t notice them in my pictures).  I felt like there was a void in the salad that only they could fill.  It was the perfect addition, resulting in a honourable mention in the recipe title.

PPPS: I’m sorry that I practically write an entirely new blog post in my postscripts.

END_OF_DOCUMENT_TOKEN_TO_BE_REPLACED

Rice wraps are so weird.

Seriously, you start off with a thin piece of translucent paper that does not look edible in any way or form.  You soak the rice paper in hot water for about 10 seconds and it becomes sticky and membrane-like.

It still does not look edible.

But alas, if you can overcome the bizarreness and cocoon qualities of the rice wrap, you will be rewarded.

Your reward?  Fresh avocado spring rolls.  As mentioned previously, my new Canadian Living cookbook was to thank for the recipe.

Basic fact: avocado makes everything better.  Including this refreshingly cool summer (or late spring) meal.  These were the second part of the little dinner party Ariel and I had on Sunday night.

In hindsight, I probably should have chopped one of my spring rolls in half so you could see the innards of my dinner.  Unfortunately I was far too eager to eat and forgot this step, so let me just explain the contents to you: grated cucumber, carrot and vermicelli (you know, those skinny, see through noodles that look like elderly angel hair).

Also contained within was a healthy dose of fresh coriander (I sucked up my hatred for it) and chopped mint leaves.  Using our fingers, we slathered on some sweet chili sauce, courtesy of my roommate Lindsay (a very necessary step requiring no utensils whatsoever).

END_OF_DOCUMENT_TOKEN_TO_BE_REPLACED

I got a new cookbook!

You can only sort of tell from the photo, but I have already bookmarked several pages using mining exploration post it notes I found around my home last week.  This is what happens when you grow up in northern Ontario.

The past few months have seen me straying from my Canadian Living roots.  This cookbook represents a partial return to my beginnings, and I was eager to try out some new recipes from the people who helped me fall in love with cooking in the first place.

One of the first recipes to catch my eye was for artichoke chicken flatbread.

With my dear friend Ariel having returned from Europe last week, I decided to cook us a celebratory “summer in Ottawa” meal.

Ariel is a great kitchen assistant and a fantastic food modeler.  As you can see, not much has changed since last October… 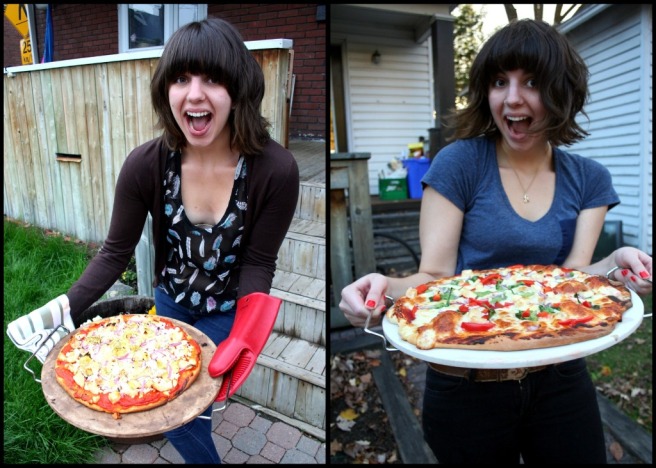 Part two of our meal (avocado spring rolls!) will be coming up in the next couple of days.

As for this flatbread, I guess it really turned out to be more of a pizza.

My local grocery store apparently finds it unnecessary to carry flatbread of any kind, and I was certainly not up for making it myself, especially considering my newfound lack of bread machine.  So I cheated.  The flatbread is actually a store-bought pizza crust.

Secret’s out.  Whew, glad we got that out of the way.

While the flatbread may have adopted several pizza-like qualities, it was anything but average.  The pureed roasted red peppers added a twist to the base, and crunchy artichokes and red pepper combined blissfully on top.

I chose to make my flatbread/pizza sans olives, because, frankly, who likes olives.  So gross.

In other ingredient news… THIS IS OF CRITICAL IMPORTANCE: the recipe says you can use mozzarella cheese, but you must use goat cheese.  So smooth, so delicious.  Make the right decision.

As it turns out, this meal became a whole little four-person affair out on my porch.  My friend John was walking by, so I invited him up to eat.  Then my roommate Lindsay came home and joined in the festivities.

End of story?  Four fed people and no leftovers.  I was both relieved and heartbroken all at once.

As always, the recipe can be found after the jump. 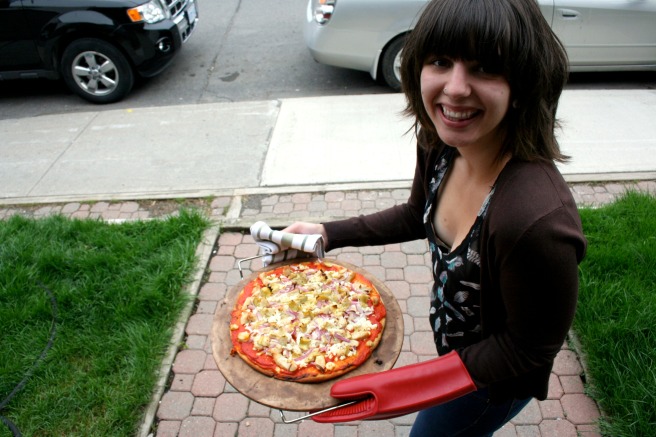 END_OF_DOCUMENT_TOKEN_TO_BE_REPLACED

I am so blissfully breakfast full.

Tuesday is my “chill out and sleep in until 8:30” morning, and I decided to extend the luxury of the morning into a gourmet breakfast. 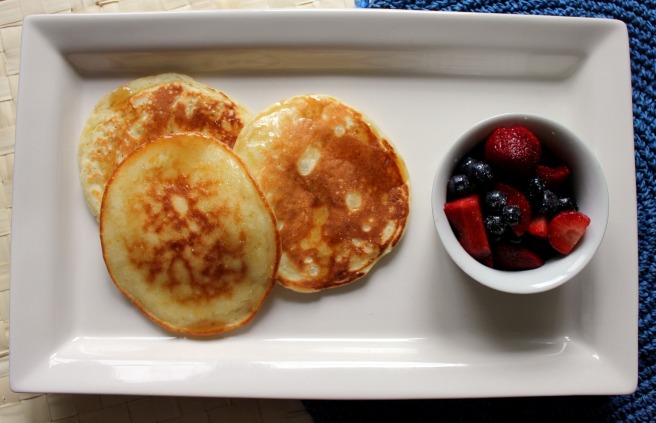 I’m not one to normally make big breakfasts, so this was a treat for me.

As fancy as this might look, it was really quite a practical meal.  Leftover in my fridge I had ricotta cheese, lemons, strawberries and blueberries.  The typical university student fare, right?  Perhaps not… Anyways, you can imagine my excitement when I found a recipe on Canadian Living that used all four of these ingredients.

Now, since I had no desire to be eating these pancakes for the remainder of the week, I cut the recipe in half and tweaked a few things to make up for my lack of raspberries, etc. I also added twice the amount of lemon rind, mostly because I got overly enthusiastic while zesting.  That’s my bad, but I will stick by my guns when I say you can never have too much lemon rind.  Also, I didn’t put blueberries in my pancakes as the original recipe requested.  I’m not a huge blueberry person.  If you are, however, a lover of these petite berries, throw them in. They’ll go nicely with the lemon. (PS: you can find my recipe under the pictures)

The pancakes turned out great.  I drizzled them with some real maple syrup and piled my fork high with pancake and berries.  I am not even ashamed to admit that I ate five (GLUTTONY).  There was actually just the right amount of lemon, and the flavours made me feel like I was sinfully indulging in dessert for breakfast.  Morning calorie splurges are well deserved.

END_OF_DOCUMENT_TOKEN_TO_BE_REPLACED

The best leftovers in the universe. 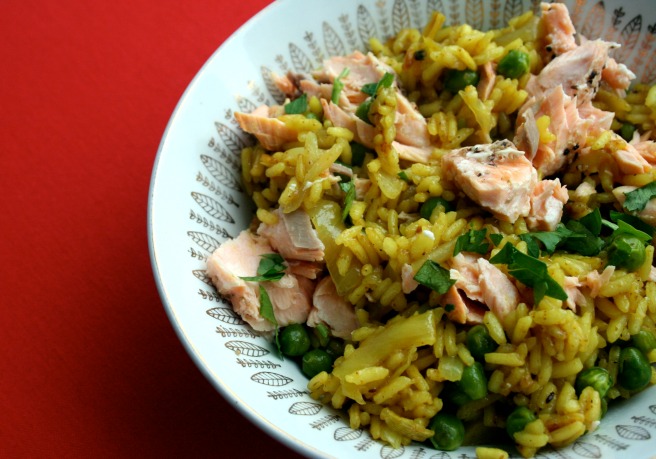 As you can probably tell by the massive gaps between recent posts, I’ve had a crazy busy March so far.  I seem to have started off my 21st year of life with a bang, and in the past weeks have managed to plan a six week trip to Europe (more to come on this later), meet some journalism idols while working at the Genie Awards, and do a variety of other extra curricular activities.  At the same time, the upcoming weeks will be a challenge.  There are huge assignments due, a March break tour guiding schedule at school, and television newsroom days.  I’m tired, I’m really, really tired.  I have gotten involved in way too many things this year and they’ve finally started to catch up with me.  I hate to say this, but I think I might be taking a bit of a blogging hiatus, or at the very least I won’t be able to post more than twice a week.  Summer, where are you?

On a positive note: daylight savings time was early this year, which means the season of outdoor food photography is upon us!  My poor patio has been neglected from photos for months now, and is begging for a little attention.  Also, I am interning at the National Post in Toronto for all of April so I’ll be getting the chance to have an amazing journalism experience, explore a new city, and hopefully cook loads.  I can’t wait.  AND Britt, my other friend Freya and I found the GREATEST house for next year that is so close to school.  There’s lots to look forward to post-March.

Anyways, here’s this salmon kedgeree dish I made a few days ago.  It’s great for anyone who loves curry and spice (warning: you and your kitchen will smell for days afterwards).  My craving for salmon lined up perfectly with it going on sale at the grocery store.  Don’t you just love it when things just work?

PS: Wikipedia tells me that kegeree is supposed to have egg. I disagree/didn’t have time to hard boil eggs before class. 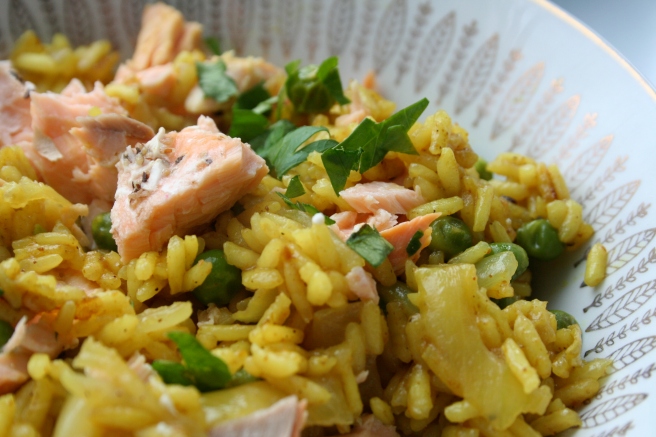 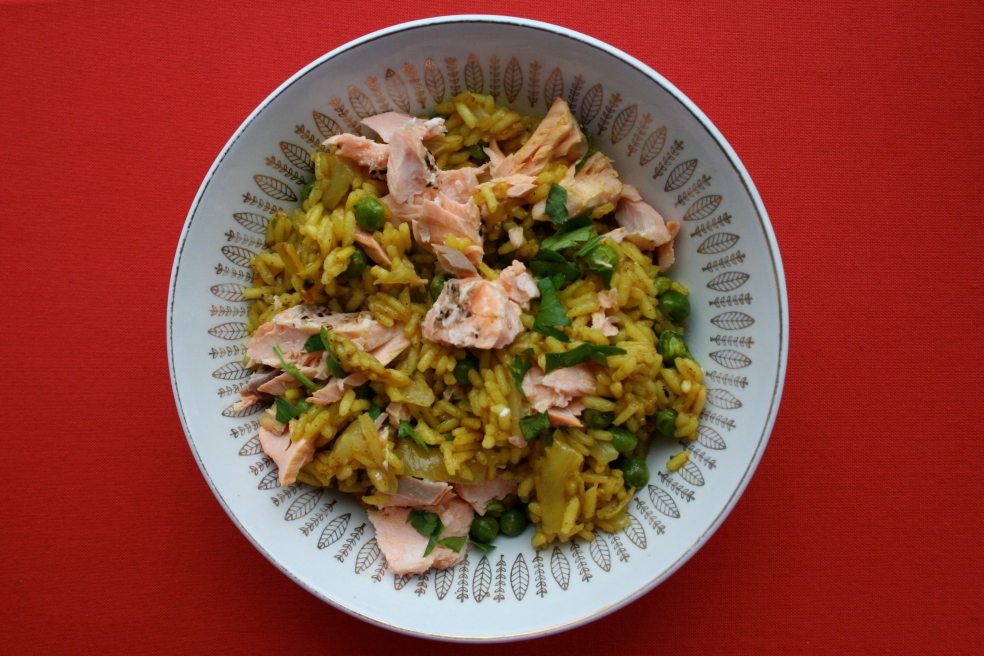