Ladies and gentlemen, the season of summer salads is upon us! 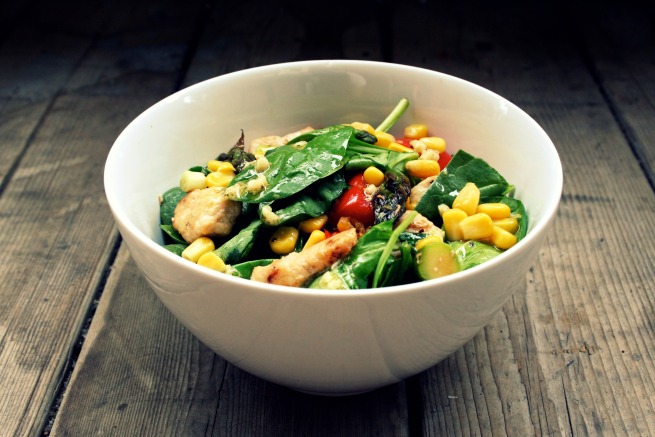 For those of you who were around last summer, you’ll recall that almost every meal I blogged about was some sort of unconventional and delicious salad.  This summer, with a newly discovered (and extremely passionate) love of quinoa, I charge back into the world of refreshingly fast dinners and cool patio meals.

Salads are like the soup of summer.  Just like their warm winter counterpart, you can virtually toss in anything you want, making them the perfect meal to clear out the crisper and dispose of your cheeses (not that I ever need help getting rid of my cheese).

Case in point: In a thrifty manner, I used up leftover spinach, walnuts, asparagus and corn in this meal.

My recipe was inspired by the mouthwatering salad that appears on the July 2011 cover of Canadian Living.  A few adjustments were made here and there, and voila!  A new salad was born, à la Hilary Makes.

PS: I really need to get a BBQ – the original recipe in CL called for grilled chicken, asparagus and corn cobs, all of which I had to fry up on the stove.  Boring!  I’m actually considering whipping out my DIY skills and making my own in the next few weeks.  It can be done.  Barbeque dinners (and patio cooking!) may soon be within my reach.  Or I might just light something on fire.  Fingers crossed for the former.

PPS: I added walnuts to the salad at the last minute (which is why you won’t notice them in my pictures).  I felt like there was a void in the salad that only they could fill.  It was the perfect addition, resulting in a honourable mention in the recipe title.

PPPS: I’m sorry that I practically write an entirely new blog post in my postscripts. 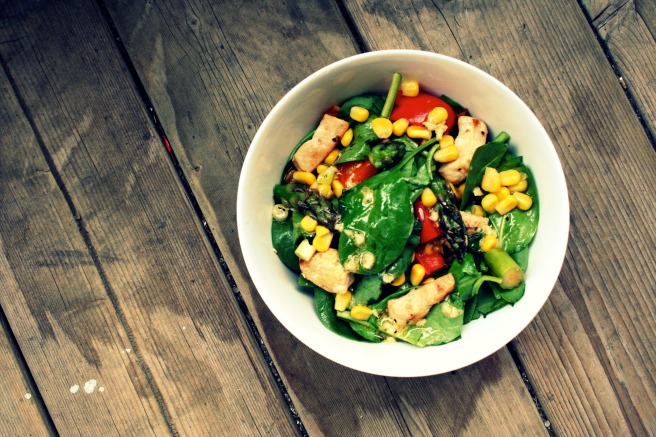 Sprinkle chicken with the salt and pepper.

In a nonstick skillet, heat half of oil over medium heat.  Fry chicken until it is no longer pink inside.  Transfer to a plate and keep warm.

Meanwhile, heat the remaining 1 tsp of oil in another pan.  Fry the asparagus, red pepper and corn until soft and corn is beginning to brown, about 10 minutes.  Add chicken to pan at about the 8-minute mark in order to reheat.

To make the vinaigrette, whisk together vinegar, oil, mustard, garlic, paprika and a dash of salt and pepper.