With the clock quickly ticking on my friend Gord’s blogger challenge, I knew that last night was as good a time as any to complete my task.  Just to remind you all, my challenge was to take one of Gord’s recipes and make it my own.  This being said, I decided to take his “Cheddar Zucchini Patties” post and ditch the cheese in favour of a hefty amount of grated potato and chopped dill.  I must admit, I can’t take total credit for this idea, and was inspired (as always) by the Canadian Living recipe for Mini Potato Zucchini Latkes.  I first saw this recipe in the mini cookbook that accompanied September’s issue of the magazine, which my mom very dearly supplied me with when she visited last week.  The only major alteration I made to the recipe was to add two tablespoons of finely chopped dill, to add some sort of consistent flavour to my meal.  These latkes turned out pretty well, however I think I definitely could have benefitted from cooking them a bit longer, as the insides still had a bit of a munchy consistency.  Overall, these latkes provided the perfect accompaniment to my salmon, completed a chellenge and were the best “dinner food that reminds me of a breakfast meal” that I’ve had in a while.

Alright, so the salmon!  Let me tell you, Canadian Living has countless recipes containing three ingredients: lemon, dill and fish.  It was quite the challenge to choose just one (I, of course, needed to use up the dill leftover from my potato and corn salad last week), but I eventually settled on the one called Dill Grilled Trout (yes, I realize I made salmon, but the recipe called for either!) This recipe saw the Glorious Return 2.0 of the beloved George Foreman grill, something which made me an extremely happy camper.

On an unrelated but otherwise interesting note: I have actually planned out my meals for the next week!  I’m not sure where this sudden urge for organization is coming from, but I’m excited! 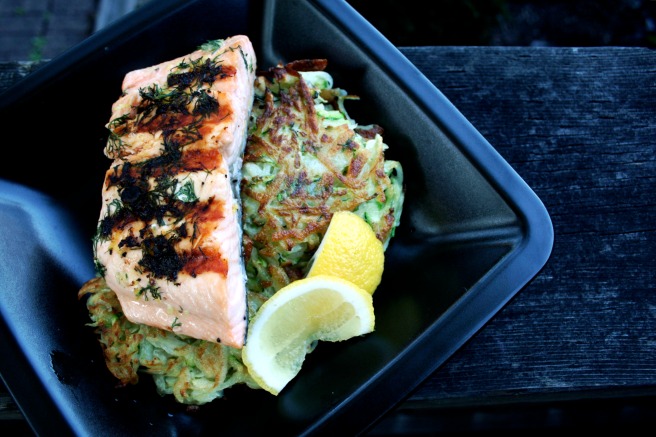