Yes, I know, I know, enough with the pumpkin already. 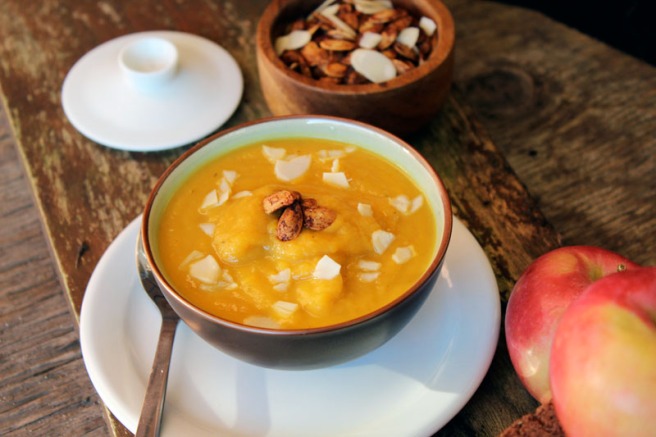 Before you continue with your inaudible web whining, you should know that this one was for a good cause. Last month I saw a tweet from Ryan asking if any food bloggers were interested in receiving a food box from Good Food Box Ottawa.

Here’s an excerpt from their website to tell you more about the program:

We are a non-profit community-based initiative bringing neighbours together to buy a variety of delicious and nutritious fresh fruits and vegetables at wholesale prices. Our goal is to purchase food that is in season and is grown as close to home as possible.

Pretty rad, huh? Good Food Box is an especially good program for students, and I’ve heard of people splitting one of the large boxes with their roommates. The program has pick-up locations on both the Carleton and University of Ottawa campuses, which means you can avoid a produce run to the grocery store. Does it get much better than that?

Why yes, yes it does. The boxes can be easily bought online and the produce contained within each varies based on the time of year. Access to fresh food has never been easier. The normal boxes run from $10 to $20 and there’s a $5 fruit bag and $25 organic box as well.

Now, as you can imagine, I quickly messaged Ryan back and requested a Good Food Box of my own. After a slight mishap in which I picked up the box a few days late (I have scattered mind/scattered calendar syndrome), I made it home and examined my options. Since I plan on making a few more recipes with what was in my box, I won’t reveal all the goodies just yet.

I will, however, tell you that I made quick use of the pumpkin and apples (speaking of which, I looked only slightly ridiculous carrying a baby pumpkin across campus last night). I have been wanting to make a recipe like this since last October and had just never gotten around to it, so my Good Food Box gave me the perfect opportunity. After searching a few of my favourite recipe source sites (Canadian Living, Tastespotting) to get inspired, I decided to create a soup of my own.

But first, the preparation. Like I said in my previous blog post, it is completely against a pumpkin’s nature to want to be peeled. You think I would have learned better, but alas I did not. The difficulty it gave me was worth it, and the roasted pumpkin came out smelling and looking like a delicious cross between butternut squash and sweet potatoes.

The soup turned out great and I garnished it with a few seasoned pumpkin seeds that my roommate had made earlier in the week. They had cinnamon, salt and nutmeg on them, and added a crunchy surprise to the top of the soup. A pie in soup form. Awesome.

The sunny afternoon meant that I needed to crane my body over my meal setting in order to take pictures that weren’t harshly lit. I was out on the front patio for so long that (a) I had to reheat my soup after the photo shoot, and (b) I attracted the most annoying cat EVER. The little grey feline refused to leave, and insisted on brushing coyly up against my leg, eyes flickering towards my open dish of pumpkin seeds. You shall not induce my allergies today, punk. After much shooing and jumping about on the deck as though there was an earthquake, kitty retreated, choosing to sit instead at the end of our front path.

Back to the soup: Of course, it is required that you serve such a meal in a pumpkin. Even if you cheat and keep the actual liquid in a bowl (I won’t tell if you don’t).

I can’t wait to decide what to make next with my Good Food Box finds. Hint: it will likely involve cranberries.

PS: don’t you just love it when your house has random planks of wood and bricks lying around that are perfect for food photo shoots? 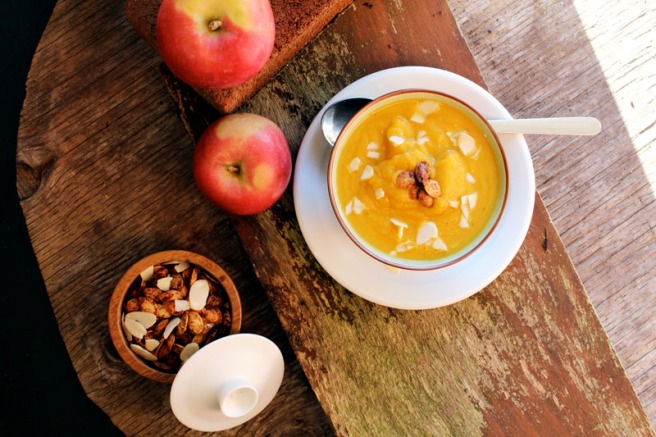 END_OF_DOCUMENT_TOKEN_TO_BE_REPLACED

This post is dedicated to my dear boyfriend Matt, who is currently under the weather. Earlier today he disclosed to me a tragic tale about how he unwillingly needed to leave his house in order to purchase soup. Matt, this is the soup you can imagine that I’m to serving you. It tasted delicious. Enjoy, you sickie.

To many, fall means sweaters, boots and piles upon piles of leaves. While a serious fan of both the former and the latter, one of which allows me to reach optimum fashion levels (I really like layered clothing and black tights) and the other of which lets me to relive my ever-fleeting childhood, neither is what I think of immediately as autumn approaches. Nope, to me fall (and winter and early spring) is all about soup. With that, I officially declare that soup season has begun. It is not to end until the snow melts in the spring. That’s an order.

The best part about soup? It’s the king of all improvised foods. It lets you toss in absolutely anything, more specifically a large quantity of the pearl barley that I’ve had sitting in my pantry for about a year. To maximize the simplicity of this self-created recipe, I bought half a pre-cooked chicken from the deli section of my local grocery store. After a quick bike ride home my backpack smelled like a thousand Swiss Chalet branches. The dogs will be following me home from school, I know it. 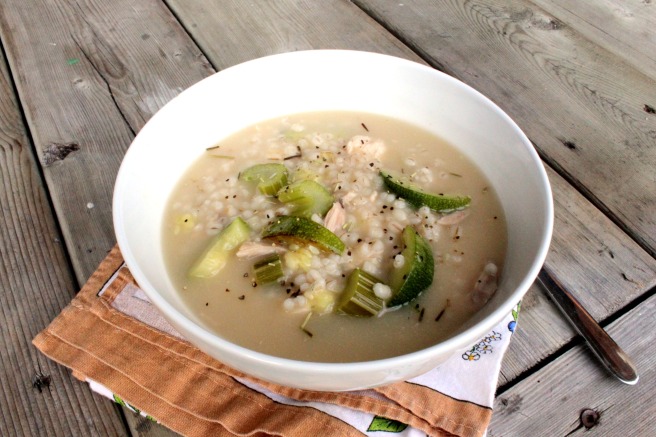 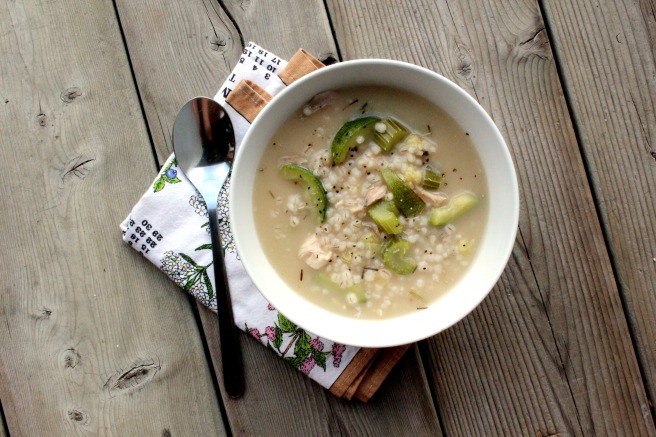 END_OF_DOCUMENT_TOKEN_TO_BE_REPLACED

This soup was my lifesaver early last week when I wasn’t able to chew anything.  Although I am (thankfully) now fully recovered from my wisdom teeth operation, this soup was a delicious way to enjoy my liquid diet meals.  Also, the only reason I decided to stop relying solely on mushy foods was because I really wanted chicken wings on my birthday…is this bad?

I’m typing this post right before I have to rush off to class, so I’ll be fairly quick about it.  Ever since I discovered that I love sweet potatoes, I have been looking for an excuse to include them in everything I make.  This soup was the perfect way to do this and, although I ate probably 1/4 of the potato before it even made it in the soup pot (roasted sweet potato = heaven), what was included added a lot of flavour and contributed to the overall consistency.

This might be the last hot soup I make for awhile, since the winter months are speeding towards the end.  Who knows though, if Ottawa weather keeps acting the way it is I might just have to extend my winter cooking until the end of March.  Fingers crossed that this is not the case, I want to start taking food pictures outside again!!!

PS: Ha! Just realized that the first picture looks like a soupy sunset. 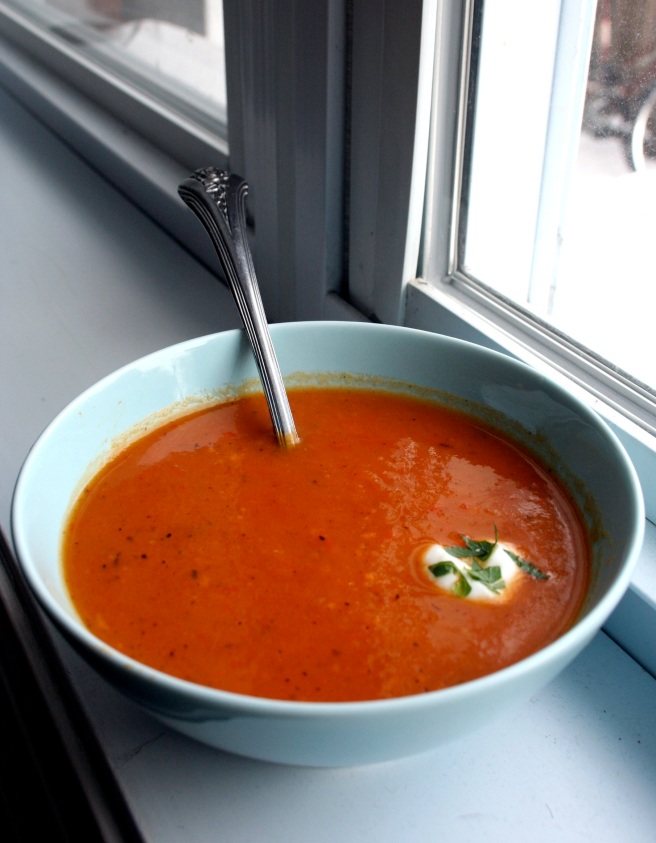 Yes, the name of this post is swiped straight from the Swiss Chalet menu.  If no one has ever had the amazing soup from this beloved restaurant of my childhood (there was one so close to my house!), then I suggest you drop what you’re doing and shimmy on down to the nearest location.  Especially if you’re in Ottawa and it’s a frigid day like today.

OR you could just read this post in warm comforts of your home.  Writing this post, I’m tempted to brush aside all the work that I have to do today in favour of an afternoon cuddled up with my Snuggie and tea.  There’s a very good chance that this may happen…

I was so excited last week when I got the March edition of Canadian Living in my mailbox.  I was extremely pleased to find the recipe for this cosy chicken and rice soup.  Before I continue, since when does cosy have an “s?”  Does that just not look like some weird attempt at parseltongue?  Nope, I refuse to be anything but co-zeeeee.  Apologies.

Now, you all know how obsessed I am with soup, so when I find a delicious looking recipe for my favourite soup of all, I really have no choice but to make it.  Unlike the traditional chicken noodle soup, this one had rice in it, meaning that it was a tad cheaper (which is always welcome).  Also, even though I really need to try leeks, I didn’t buy them for this recipe, since I feel absolutely awful when I have leftover veggies that I forget about and don’t use.  Must minimize waste.

Mmmm, and chicken thighs, you have changed my life.

PS: these pictures were taken on my friend Gord’s window sill using a bowl that I bought this weekend in Chinatown.  I am super jealous of his rustic window settings.  Also, speaking of Gord (who, if you recall, is the author of another fantastic student-friendly food blog), we cooked up something special this weekend.  Stay tuned to find out more…

PPS: see recipe after the jump.

END_OF_DOCUMENT_TOKEN_TO_BE_REPLACED

Okay, so you know how a few posts ago I said that my borscht was the cheapest thing I’ve ever made?  Well I lied.  Poor Mr. Borscht didn’t hold his title for very long, and this new soup quickly edged it out in both taste and price.  While I could go on and on about how great this soup was, I think I’ll condense my admiration down to four main points *ahem*:

1. It was SO fast to make.  Since I’m apparently never home for dinner anymore, I decided to make this soup at 9:15 a.m.  Yes, I had soup for breakfast, don’t judge me.  I had to be at school that day for 10:45, so let this tight schedule attest for how quickly this soup cooked itself up.

2. I’m not really a fan of chopping things, so I was relieved when this soup only required two potatoes, a celery stalk, and an onion to be chopped.  BUT HOLY, on that note, I cut up the most potent onion ever!!!!!  Seriously, I was crying like a teenage girl listening to Taylor Swift.  I wiped my eyes on my shirt so many times that my sleeve was partially drenched by the time I was finished cooking.  I need a set of these!

3. This soup just confirmed that my taste buds are way more high maintenance than in my “I’m just going to eat plain rice for supper” days (aka last year).  I was not at all happy with how little cumin and cayenne pepper that the original recipe requested, so I simply added a teaspoon more of the cumin, and about ten pinches of cayenne pepper (versus the original single pinch requested).  Mmmmm, that spice, combined with the explosion of fresh parsley, made my life.  Also, for anyone that is stuffed up or sniffly from a winter cold, this soup is so spicy it is sure to clear your sinuses!  Who needs cold fx, right?

4. Last but not least this soup was, of course, cheap.  I calculated my total cost per serving to be about 80 cents a bowl.  Stellar!!

Recipe: Canadian Living (with a few spicy adaptations by yours truly). 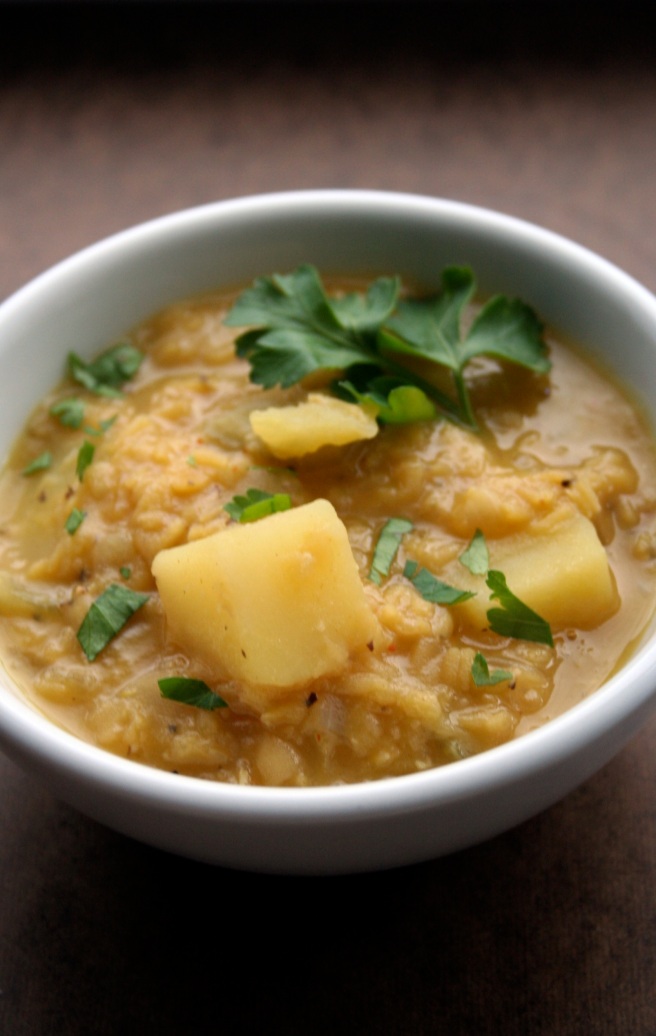