(Getting caught up on blog posts, thus you are hereby teleported to the beginning of December again!)

My last two visiting spots in Nepal have continued to play on that “day and night” theme I mentioned a few posts ago, only this time in a less literal sense.

Janakpur to Ilam – the difference between the two eastern Terai towns is something extraordinary. Whereas Janakpur is a palette of colours, sounds and people, Ilam offers a complete foil.

The best way to describe Ilam is “calm and quiet.” It’s a classification that probably isn’t that surprising, as the town is best known for its tea fields, the green bushes carpeting the rolling contours of the terrain and creating a geometric pattern of square-shaped foliage across the landscape. It’s a change I welcome beyond belief, after the overwhelming assault to my senses and personal space that was Janakpur and the proceeding and precluding bus rides.

Ilam is Nepal’s answer to India’s Darjeeling region (which is just a short hop, skip and a jump away). Outside our guest house is a set of stairs that leads up through tea fields and onto a dirt road, which twists around the mountain, each turn offering another spectacular view.

Marlon and I took a walk up here the other day, and found ourselves flabbergasted, outside the realm of caring that we were each taking the same tea field photo a dozen times. The clouds hung heavy over the nearby mountaintops, allowing just a few spotlights of sun through, highlighting tiny tea houses and patches of field. It is one of the most beautiful sights I’ve seen on this trip so far. 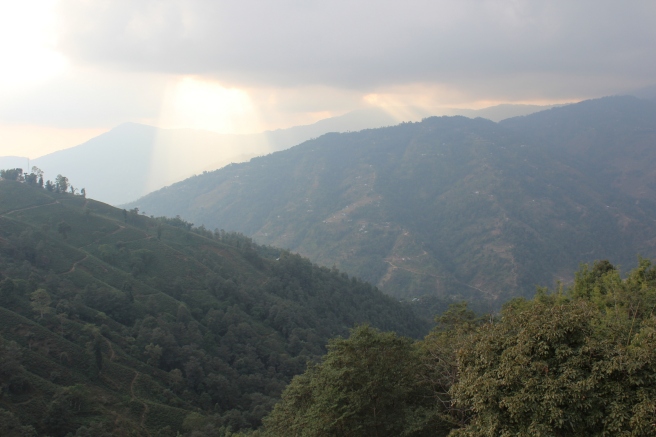 Our four days in Ilam have mostly served as a break from the rush of Kathmandu. Days haven’t started too quickly, meals have been frequent, and much Ilam tea has been consumed. As I have learned over the past month, nothing in Nepal moves quickly (except the traffic). With everything slogging along at a relatively carefree pace, Marlon and I decided to embrace it and do the same.

We did have one big exploration day, an adventure I consider the highlight of our time in Ilam. On December 10, Marlon, Colin (a Canadian expat living in Malaysia who we met while waiting for the Janakpur-bound bus in KTM), and I spent the day trekking through different parts of the Ilam district, aiming to end up in a village named Sanrumba. Colin had read about a local market held there every Tuesday, and we decided it was a worthy end goal for our hike.

Setting foot from our guesthouse, the trek just re-emphasized the dramatically varied landscapes that can be found in Nepal. Last month I was strolling through alpine regions, past glacier lakes and thick silver birch forests. This month, it is through tea fields and paths lined with tall bamboo stalks and edged along paddy fields. Our route to Sanrumba was not so much a real trail, in so much as we had an intended direction for the village, as well as the knowledge that we needed to go down, across some river, and then up again. This meant we were primarily walking down through people’s backyards, their questioning stares turning into broad smiles, as we pressed our palms together and offered a friendly “Namaste!”

After an hour-and-a-half, our path led to a small stream. Despite having just passed a local man whom, upon being asked the direction to Sanrumba, pointed in the opposite direction, we decided the way across this stream must somehow be a shortcut. So we unlaced our hikers, stripped off our socks, and waded in for the easy crossing. I rolled my pants up to my ankles and left my camera dangling around my neck. It turns out one should not judge the depth of a stream from the banks, and we were quickly knee-deep in speedy currents, balancing on slippery rocks. Luckily, the crossing was made without any camera drowning incidents, and we sat on flat boulders across the stream, soaking up the sun and drying our feet/my pants. About 20 minutes later we found a real bridge leading right back across that same stream, and encountered the same local man, who smiled knowingly as we yelled out about the pleasantries of our mistaken loop.

Shortly later we reached the real valley we were supposed to cross. A dam had been constructed to the right, a locals sat on the ground chipping away at big stones to make gravel. We crossed a metal bridge that was still under construction, propped up by a bamboo structure (that was really freaking cool). Obligatory self-timer photos of our trio were taken, as we pretended to be gymnasts, leaping across the metal bars.

Then, it was time to climb. After an hour’s ascent, wondering when we would reach the elusive Sanrumba, a local on a motorbike told us we were at our destination. We looked off above the dirt road at the stacked potato fields, banana trees, and scattered houses, and spent the next little bit searching for our Tuesday market, which, to date, its existence we have yet to confirm. So, market-less and lunch-less, we sat at the edge of a terraced garden and ate mini oranges, as a handful of local children pointed and stared. It was a picnic with a view, and we looked up at the opposite mountaintop, anticipating the uphill, late afternoon climb back to Ilam.

That return walk was tiresome, but enjoyable, and we stopped at one of the many snack shops (they kind of remind me of camp tuck shops) to reload our blood sugar levels with more juicy oranges, coconut cookies, and chocolate. We sat there for a while with the locals, spitting out orange seeds, drinking delicious spiced black tea, and mimicking an especially-exuberant rooster.

Back in Ilam, we quickly decided we needed real food, and Colin recommended we find a place that made sukuti, a plate of gingery dried water buffalo meat and vegetables. We ended up in the back room of a small restaurant with the dish at hand, sipping tongba, a Himalayan speciality made by pouring boiling water into a metal pot filled with fermented millet. Our giant metal cups looked as though they were part of the Wizard of Oz’s tin man, and we sipped away at the brews like happy children. Just as we thought our re-fills of tongba were enough, the owner of the restaurant came over with a plastic pitcher, like those you usually use to serve lemonade, its sides embossed with colourful illustrations of flowers and fruit. “Local,” he said, in a way that wasn’t a question. “Local” is the name for raksi, a distilled rice wine home-brewed in kitchens across Nepal, to a varying degree of alcohol percentage and flavour. Over the next two hours we had what was four ounces of quite-potent raksi, chasing down the burning flavour with a mouthful of tongba.

Six o’clock (yes, really) hit like a brick wall. The three of us were, pardon my french, hammered, we proceeded to walk down the darkened main street of Ilam (everything closes so early!) in search of chocolate and/or cookies. Along the way, we encountered four early-twenties Nepalese men who were celebrating a friend’s birthday. Our conversation was peppered with the standard country-of-origin curiosities I’ve come to anticipate (Sister! Sister! Where you from, sister?). The mention of Canada quickly changed the subject to talk of singer Bryan Adams, who is huge in Nepal, and whose concert in Kathmandu a few years ago attracted nearly every local I’ve met, it seems. Before I knew it, the handful of us were belting out “Summer of ’69” on the street, our new Nepali friends filling in the lyric gaps when the real Canadians failed to remember the words to the anthem.

We all went to bed embarrassingly early that night, our stomachs full and minds filled with catchy Canadian singalongs.

Today I returned to that restaurant from last night and bought a bottle of homemade raksi for the Nepal-inspired feast I intend to host when I’m back home. The owner funnelled the brew from a giant windshield wiper container into a one litre plastic water bottle, the contents of which he poured onto the street. The total cost? One hundred rupees, or $1 CAN. At that potency and price, raksi could be a dangerous import. I also bought Ilam tea, of course, to add to my already-large collection of masala and milk teas.

One thought on “Finding peace (and raksi) in Ilam”