1. I learned how easy it is to make hummus.
2. I made the best bruschetta I’ve ever had (and this is saying something, because there is this restaurant in Sudbury that makes a TRULY delicious mushroom and goat cheese bruschetta…Please know that I do not take this title lightly)

As many meals are, this one was unexpected. After getting off work late Thursday night, I popped over to the grocery store with full intention to only purchase sugary ingredients to use in the caramel sea salt brownies (WOAH good, those are being blogged about next) that I was making for today’s newsroom treat.

When I arrived, it was 7:30 and past my usual dinner time, meaning that a walk through the grocery store was like a walk down temptation lane. I couldn’t just go straight to the baking aisle. I needed to buy dinner items.

I decided my meal would be based around the cherry tomatoes I got from a friend when he returned one of my many Mason jars (these jars are even better when they contain garden-fresh veggies!). 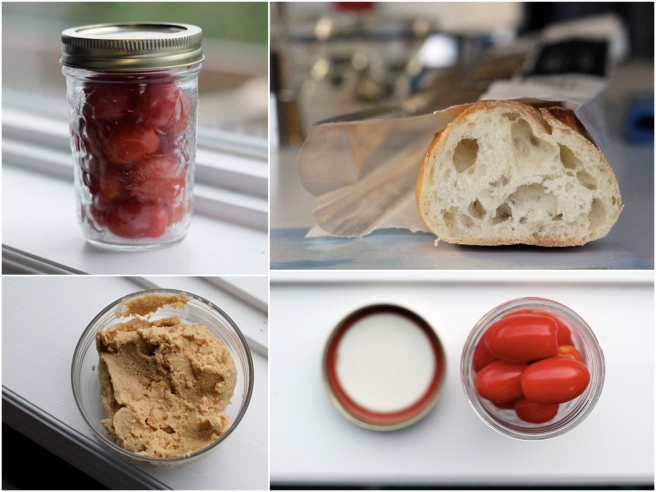 Since my mom had made a very delicious, Greek-style salad the other night and since it has been a year since I was in Greece, I decided on Greek bruschetta. This was one of my better life decisions. In the end, I didn’t actually have to buy that much – just a baguette, in fact. I did, after all, have leftover hummus ingredients to use.

So right, let’s talk hummus. I knew in theory that hummus was very easy to make, but I think I just thought that in application that must be a lie. Wrong, wrong, wrong! Super easy. I had tahini left from my last blog post, as well as a Tupperware of leftover chick peas. Add a squeeze of lemon and a sprinkle of cayenne and we’re in business.

While waiting for baguette to toast, and in between chopping each of the bruschetta toppings, I ate huge slices of the remaining baguette and hummus. One piece, another, another…just one more. It’s a downward spiral, really. Making homemade tahini was my gateway snacking food.

Normally I write a rough version of my blog posts while eating, but I just couldn’t do that with this bruschetta. I was too busy double fisting the delicately topped baguette, like a savage who hadn’t seen food for ten million years. It was so delicious. Really, really great. The flavours worked together so well…the oilyness of the artichokes, the crunch of the toasted baguette, the juicy sweetness of the tomatoes and the sharp edge of the feta. Food teamwork at its best. Like most bruschetta (or food consumed by me in general), this meal was exceptionally messy. The remaining platter was scattered with tiny chunks of feta and a few slices of red onion that were waywardly cast aside during my barbaric eating session. As it rested on my keyboard, my right hand was slightly oily, a residue that I think must have been marinated artichoke oil.

Speaking of that…it’s not a real dinner with Hilary until a piece of technology and/or technology accessory gets some sort of food on it. My poor iPad case was subject to a bath of this marinated artichoke juice. I’m a disgusting human being, really.

I’m so happy I decided on this rectangular, white serving platter. Thank heavens it was easy to find – wedged in my closet between my saxophone and chest of drawers, underneath my three-tiered cupcake carrier. Typical. 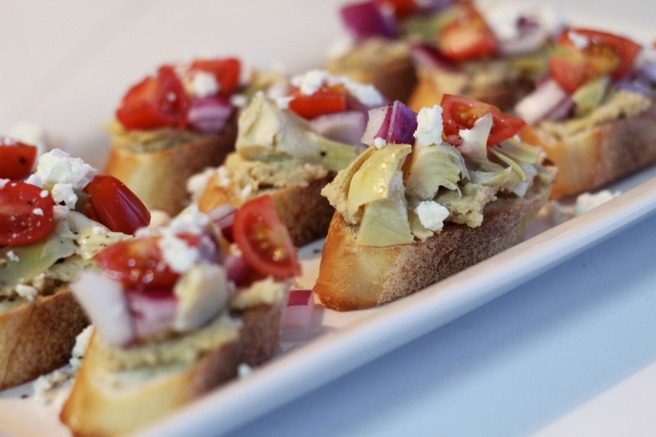 I ended up writing this blog post while hanging out with my baby brother (who is off to university next week!!) and transferring 1,500 iPhone photos from his Macbook to mine via Dropbox. Don’t ask.

Preheat the oven to 400 degrees. Cut the baguette diagonally. Brush one side of each piece with olive oil and let toast on a baking sheet for about four minutes. Flip over and repeat with the other side. Set aside baguette once toasted.

Spread a layer of hummus over the toasted baguette. Add chopped artichoke, red onion, cherry tomato and feta. Grind a a dash of black pepper over top of it all.

Put all the ingredients into your food processor or Magic Bullet and blend until well combined.

Makes about 1 cup of hummus.

6 thoughts on “Greek bruschetta (baguette and hummus for dinner)”