Being at home alone means something different to everyone.

To me, it means absolute post-work freedom. Last night, that freedom took a variety of forms: going vegetarian for dinner, eating chickpeas and strawberries (not together) while making said meal, obsessing over episodes of my new favourite show (Girls on HBO), fantasizing about homemade Popsicle flavours, buying pasta that is shaped like tiny radiators, drinking my favourite craft beer brought back from Ottawa, and dancing to music in the kitchen while picking away parts of the roast chicken I bought at the grocery store.

Yes sir, it was a good night. 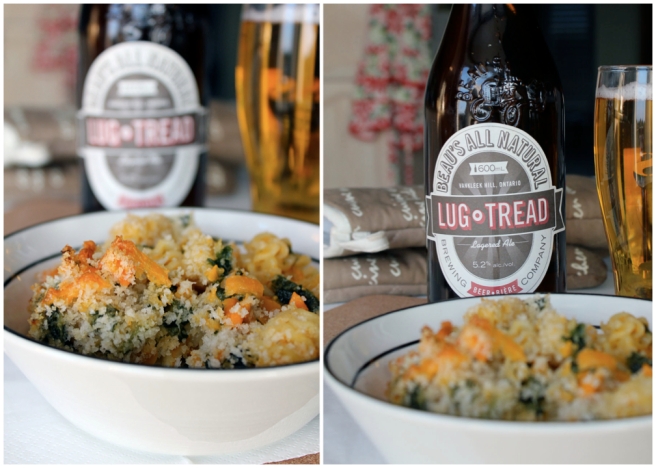 There’s nothing like a dose of might-as-well-be-Monday macaroni and cheese to chase the post-long weekend blues away. I won’t whine, but I will say that I am always a little bit sad when I return from a few days in my old home, Ottawa. This weekend was absolutely brilliant, and filled with patio word games, human-chain crowd weaving and rental bike cruising. More on that later.

My Tuesday doubts were doused by this delectable dish.

The sweetness of the potato contrasted perfectly with the sharpness of cheddar. Both were balanced by the crunch of the breadcrumbs and the tender, chewy kale. The orange hue and crumby exterior made me feel like I was eating sweet potato tempura and, let’s face it, any healthy dinner that can be compared (visually or in taste) to a sinfully marvellous deep fried appetizer deserves to be applauded.

To me, kale was an unknown variable, the “x” in the equation that has yet to be solved. Tonight, I finally manned up and solved that problem and was most happy to discover that the answer was: x = awesome. I used a bag of frozen veggies packaged up by this Canadian company called Cookin’ Greens. 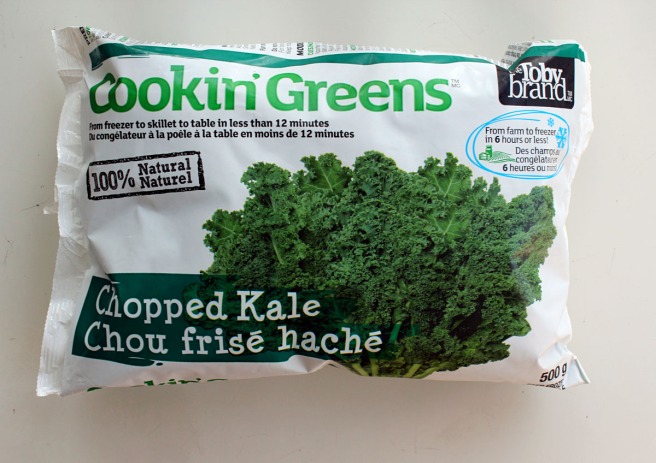 Their website says things like “the new fast food” and “from farm to freezer in six hours or less” … both of which seem pretty stellar to me as we continue to live in a society that doesn’t put enough value in local food or healthy eating. God knows we could all use some more dark and leafy greens in our life. The kale was the perfect supplement to this meal and I can’t wait to use my “designer mix” (spinach, collards, rapini, yellow beans and onion) later in the week.

Oh yes, and one more perk to being home alone? So many leftovers!!! Initiate lunchtime excitement. 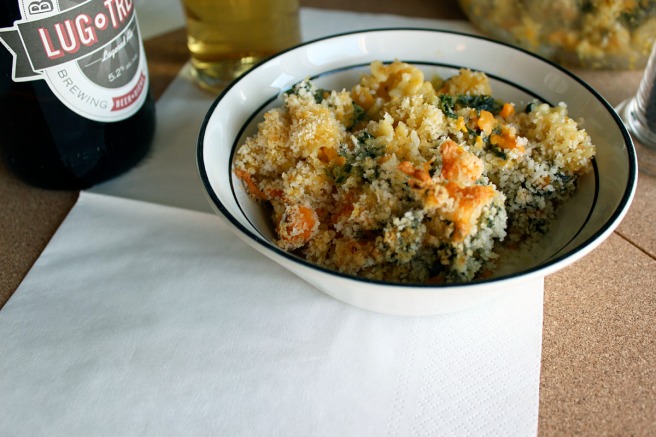 Cook the chopped potato in a pot of boiling water until tender and able to be pierced with a fork, about 15 minutes. Once cooked, mash with a fork/potato masher and add milk.

Once the potato is cooked and mashed, pour the potato-milk mixture (it will still be liquidy) into a large non-stick pan with high sides. Add the kale (defrosted), 1 cup of the cheddar cheese, maple syrup and salt and pepper. Stir in the flour. Allow to simmer until the mixture has thickened and most of the milk has evaporated.

Meanwhile, cook the pasta in a pot of boiling, salted water, until not-quite tender. Drain and add to the thickened potato mixture. Combine well.

Pour into a large casserole dish (I just used my round Pyrex bowl, but you can use anything that fits it, really).

Combine the panko bread crumbs and melted butter. Mix with a fork. Sprinkle over the top of the macaroni and cheese mixture and stir a bit to coat the top. Add the remaining 1/2 cup cheddar cheese.

Bake for 20 minutes or until the bread crumbs start to brown.

10 thoughts on “Sweet potato and kale macaroni and cheese”