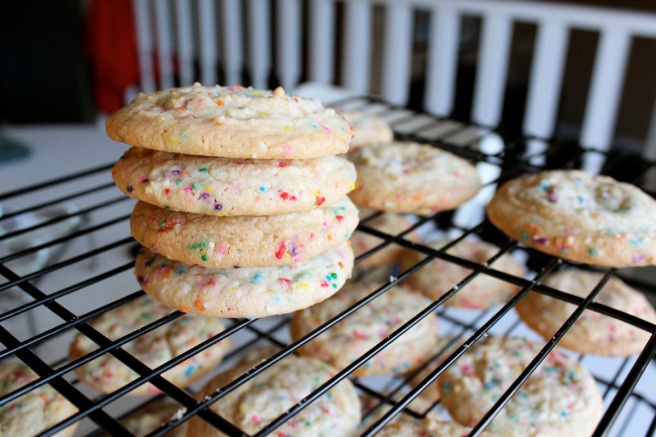 I was browsing Tastespotting on my iPad the other day (a truly enjoyable experience, it seems like this food gallery site is optimized to be viewed perfectly on a tablet) when I saw a picture of these cookies. An hour later, I was making the recipe.

I know they look fairly childish and, like nearly everything else on this blog, prepared for a maniacal troop of five-year-old birthday-goers. This is something my mom brought up with me the other week. That’s right, we had the “people at work might not want to eat colourful things” conversation. I was sad for about 10 minutes after that, before realizing that I would make whatever I wanted. Things I make – colourful or not – always seem to disappear with quite a bit of ease, and so I maintain: things can look like a rainbow and still taste delicious. Case closed.

Anyways, the result of my baking was these beautiful little morsels that I thought resembled homemade Chips Ahoy cookies. They had almond extract in them, which was absolutely the best. If I was the type of person to include weird qualities about myself in my Twitter status, one of them would definitely be “something, something LOVES ALMOND EXTRACT.”

I brought these into the newsroom on Friday so we could all pig out during story meeting. Story meetings are more productive when cookies are provided: fact.

I also made a point to wear the sprinkle headband that I made back in March. I always thought it was channeling a Tim Hortons vanilla dip doughnut, but it turns out that these cookies were the true inspiration. Check it out…matching baking and head ware – it’s all the rage!

Preheat the oven to 360 degrees.

Cream the butter and sugar for about 2 minutes, until fluffy. Add the vanilla, almond, and egg. Beat until well combined.

In a separate bowl, whisk in the flour, baking soda, and salt.

Slowly add the flour mixture to the butter mixture, and stir until it’s all added and combined. Mix in the sprinkles (don’t overmix or the sprinkles will start to bleed into the dough).

Bake for about 15 minutes. (Note: Only bake until they very slightly start to turn light golden brown just on the edges. You don’t want them to totally turn golden or they’ll be crisp cookies. Check them around 10 minutes, then 12, and so on.)

Cool on a wire rack. Store in an airtight container up to 4 days.