I am a completely uncreative person.

This mini sandwich series has been inspired by two things and two things only. One of those things is not a Hilary stroke of genius. Unfortunately.

Blame/credit Things Organized Neatly (awesome Tumblr) and What to Cook & How to Cook It (awesome cookbook).

Well now that I’ve admitted to being a shameless Internet troll and design copycat, let me introduce you to something I did think up myself: this delicious apple tuna sandwich filling. I would say it is the most delicious tuna fish sandwich that I’ve ever eaten, but I am in no way qualified to make that statement. It’s only my third ever.

Baby cans (3.5 oz) of tuna were on sale at the grocery store the other day, and, since I can’t really afford paying for groceries anymore, I stocked up. I also want to do a craft with the empty cans in the near future. Because, you know, I need more DIY stuff to hold my other stuff.

Anyways, here’s what was in this sandwich:

And, as if I don’t already spend enough time photographing my food once it’s done, this step-by-step, organized neatly thing is a heck of a lot more work. It involves me kicking open our screen door multiple times and nearly face planting into the porch as I perch birds-eye-view above the food. Strange stares and judgmental glances from passersby happen throughout, but I’m used to that by now (hey, at least I’m not standing on chairs anymore).

PS: I get that these photos aren’t completely step-by-step, but do you really want to be the one who takes pictures of me dicing the apple? Nope, didn’t think so. 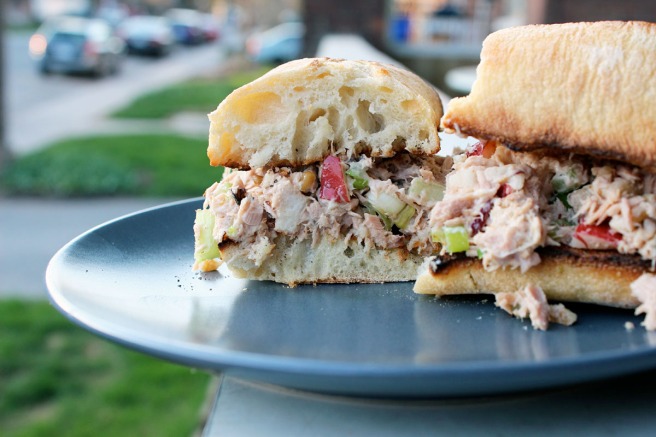 Toast the panini buns on broil (being careful not to slightly burn them as I did!)

In a medium-sized bowl, mix together the tuna, celery, green onions, apple, walnuts and mayonnaise. Grind a generous amount of black pepper over top. Scoop onto the panini buns and enjoy. Toast if you want.