Yes, you heard me. Green velvet. A festivity of food colouring, if you may. Ever since catching word of Bakerella’s take on traditional red velvet cake, I’ve been dying to try this one out myself. And what better time to do so than on St. Patrick’s Day?!

March 17 is always a weird day for me. Even though I’m more Irish than 90 per cent of the population (what up, dual citizenship?), I always feel a little weirded out by a holiday that us North Americans have created just so we have another excuse to patio drink (which, hey, I’m totally fine with). I don’t know, I’m fine with people getting hyper-patriotic, but I wish they knew what they were celebrating. But I digress…

Normally on St. Patrick’s Day I’m busy baking for another celebration – Brittany’s birthday! But that did not happen this year. Shipping a cake (or pavlova) to Paris is sort of pricey. Virtual wishes were sent this year. And so, I focused all my attention on these.

Woah, they were cool.

A few things:
1. Cake flour is probably the best thing to have ever entered my kitchen. It makes all the difference in cake-making, especially once you realize that the self-rising stuff already has the salt and baking powder added. May have missed that important point a few times…

2. Lucky Charms topping St. Patrick’s Day cupcakes = a hit. The marshmallows rehydrate themselves after sitting in the icing.

3. A strong, spiked buttercream frosting is sometimes enough to give you a head start on the day’s 19+ festivities. Especially when you’re eating rather large globfuls of it for breakfast. *burp*

4. It is essential that you up the Irish ante on these cupcakes and bake them in gold liners ($3.99 from Bulk Barn). Be incredibly pleased when the revelling crowds realize they look like tiny pots of gold. 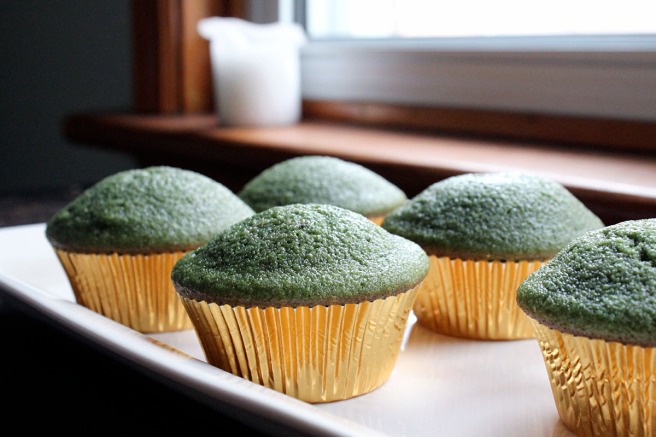 With an electric mixer on medium-high speed, cream butter and granulated sugar until pale and fluffy. Add eggs, one at a time, beating until each is incorporated, scraping down sides of bowl as needed.

Beat in vanilla. Add flour mixture in three batches, alternating with two additions of milk mixture, and beating until combined. Beat in the green gel food colouring until well mixed.

Bake for about 15 minutes, or until a toothpick entered into the centre of a cupcake comes out clean.

In a medium-sized bowl, beat the butter until light and fluffy. Beat in the icing sugar and Bailey’s, alternating between each. Add the vanilla extract.