Leftovers. This yields so many delicious leftovers. 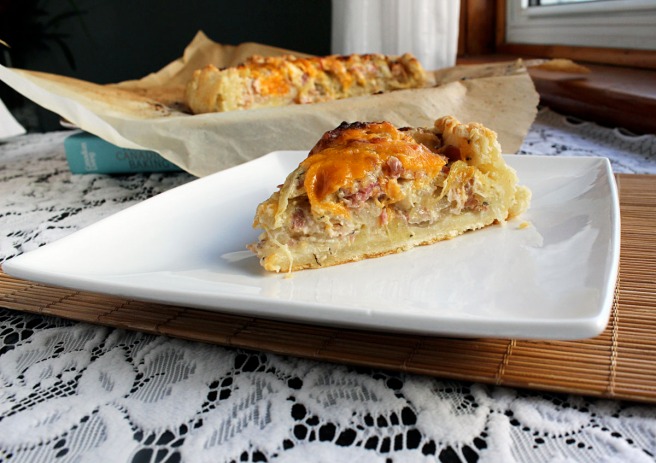 I feel as though there is no better place to write this post than sitting in my living room in front of our faux fire. It’s warm, cozy and satisfying, just like this galette. This dinner was the ultimate “curl up in your pyjamas and eat” (not that I ever do that, nope, never) meal.

But before I talk about that, let me discuss the experience of pie crust making. People have told me that making pie dough from scratch is truly a character building experience. They say it can be a daunting task. Perhaps it is my love of kneading things or my meticulous measurements, but my experience was actually a simple and positive one. The crust recipe you’ll find below is courtesy of the Complete Canadian Living Baking Book, and those folks know what they’re talking about. Needless to say, I’m now on a bit of a pie kick. In fact, I am currently plotting a baking extravaganza to make use of my newfound skills. I’m thinking a banana cream pie might be first up…

This galette actually turned out so well. I was very happy. When I first made the filling (the onion and pancetta) and piled it on to the rolled out dough, I was terrified. The thing was stuffed to its very fullest point and was upright and chubby. I was sure that when I put it in the oven it would simply explode out of objection. Luckily the exact opposite happened, and the onion and pancetta continued to cook down, leading to a flat and visually appealing dinner. Whew. Dodged a bullet there.

And gosh, was it ever pretty. But of course (and this can be classified as a first world problem, fyi), daylight savings time once again conspired against me. I finished making this at a reasonable dinner time (6 p.m.), yet it had still been dark outside for a whole hour-and-a-half. Sadness. No patio photography for me. As a result, the  photo shoot for this dinner was held the next afternoon on my dining room table with a galette that retained little of its fresh-out-of-the-oven splendour. So I hope these are still okay photos. I even put the entire galette back in the oven to try and make it look appetizing again!

Anyways, major noms were had and I’m ecstatic that I added pancetta to the recipe. So freakin’ good. 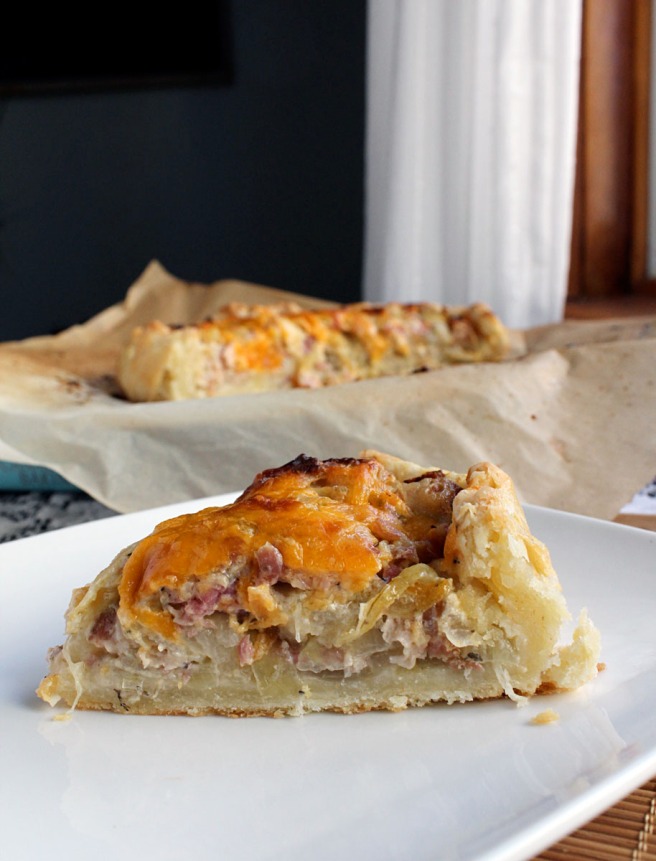 Whisk the flour and salt together and cut in butter and lard using a pastry cutter or two sharp knives (I use the latter). In liquid measuring cup, beat the egg yolk with the vinegar; pour in enough water to make 1/3 cup. Drizzle over flour mixture, tossing with fork until ragged dough forms. Press dough into 1 disc. Wrap and refrigerate until chilled, about 30 minutes.

In a large, non-stick skillet, heat butter with oil over medium-low heat; cook onions, sugar, salt and pepper, stirring often, until very soft and light golden. Add the pancetta and cook for another five minutes. Scrape into bowl; let cool. Stir in one of the egg yolks, 3/4 cup of the cheese, sour cream and thyme. Set aside.

Whisk remaining egg yolk with 1 tbsp water; brush over pastry. Bake in the oven at 425°F for 10 minutes. Reduce heat to 375°F and bake until crust is golden, about 30 minutes. Let cool on pan for 10 minutes. Cut, serve and enjoy!