I can’t help but think that any food with the word “tower” in its name should be the subject of its very own fairy tale.  Originally when I started to write this post, I was going to make up some lame little story to accompany it, before realizing it excruciatingly difficult to write a fairy tale where the protagonist was locked up in a tower made of ground meat.  Kind of kills the romanticism factor, huh?  I guess I’ll leave the fairy tales to Disney.  I’m in it for the food.

Obviously when planning my Cinco de Mayo feast, I realized my meal wouldn’t be complete without some sort of:

Since I really wasn’t in the mood to make tacos, and since there was only one of me, I did the next logical thing: created my own dish.

Yeah, I know, it looks pretty simple, but the flavours were actually incredibly effective and satisfying.  This tower of Mexican joy also allowed me to utilize one of the new food rings I bought in Kensington Market a few weeks ago.  Basically, a food ring is a large, well ring, with built-up sides.  It kind of looks like a really clean piece of pipe.  The point of a food ring is to be able to stack your food nicely and compress it in such a way that it doesn’t become a crumbled mess (partial failure on my part, yes).  It also allows you to achieve the presentation seen on all your favourite cooking shows – including TOP CHEF CANADA, which I am now completely obsessed with.

To go along with your food ring, you’re technically supposed to have this flat piece that fits exactly inside the ring.  This piece is meant to press down everything you have inside.  Despite the urgings of the store clerk that this compressor piece was absolutely and completely key, I, of course, did not buy said item.  Come on, it was an extra $13.  I insisted on using a spoon.

It sort of worked, and I consider myself the winner of this food compressor debate.  Take that Mr. Kensington Market Vendor.

As you’ll see below in the recipe, I got to make some more homemade tortilla chip-like things, something I love doing.  Slice up the tortillas (while snacking on one), pan fry them with salt and chili powder and life is grand.

Super easy and semi-impressive looking for a summer night out on the porch.  I ate this on my stairs as the dog walkers and scooter enthusiasts passed by in (what I assumed to be) sheer envy. 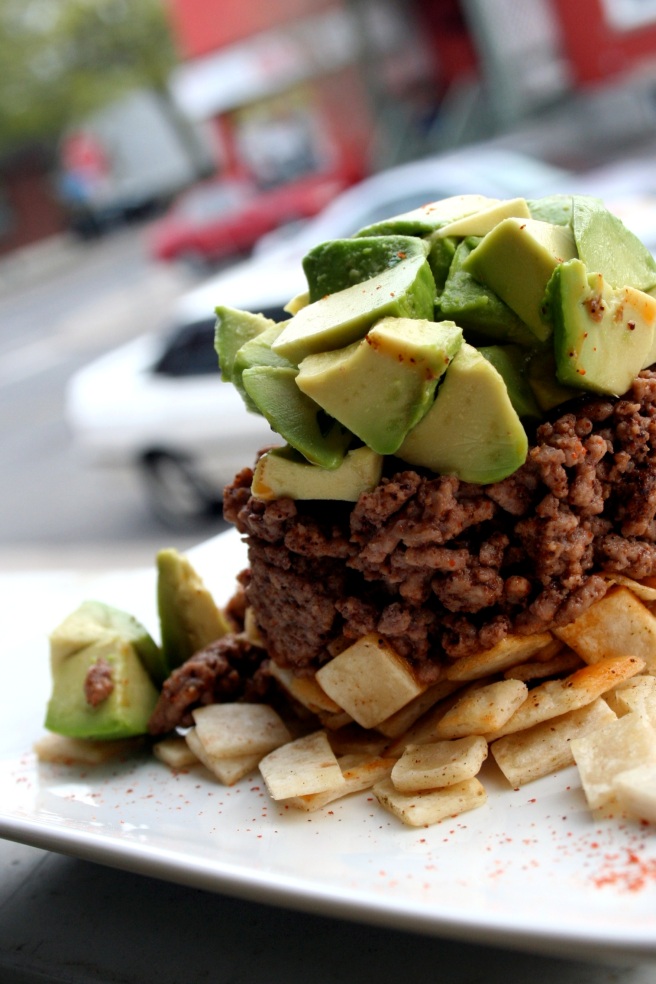 After your tortillas have been cut, fry them in a non-stick pan that has been heated up with the olive oil.  Season them with the chili powder and salt.  Fry until brown on the outside and crunchy.  About 15 minutes.

While the ground beef is cooking, cut your avocado into small pieces.  If you don’t know how to properly cut an avocado (which I had no idea how to do until about half a year ago), you can watch several helpful YouTube videos.

Assemble your tower using the food ring.  First, put the tortilla chips into the ring, trying your best to press them down with the back of a large spoon.  Next, add the ground beef, again pressing in with a spoon.  Finally, add the avocado.  Carefully remove the food ring.  Sprinkle the tower (which is hopefully still in one piece) with as much salt and cayenne pepper as you desire.  Serves two.

NOTE: don’t have a food ring?  I didn’t have one for the longest time, so I tried a variety of semi-insane different methods, including, but not limited to:
– cutting both sides out of a soup can to form a metal cylinder
– using a round cookie cutter
– making an inverted tower in a glass cup