At this point you’ve probably guessed that this pasta was kind of creamy, huh?

With the combination of melted provolone and Parmesan cheese, whipping cream and cream cheese, I had no other choice but to include the adjective twice in the title of this post. 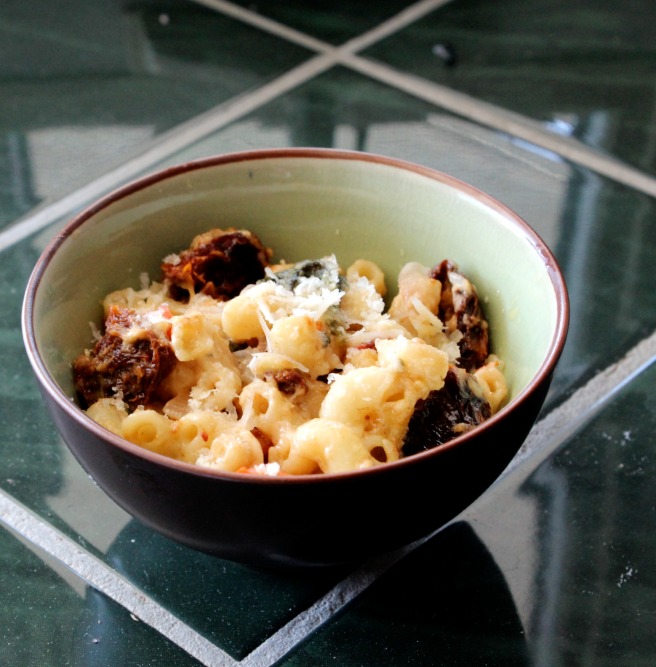 Oh, and speaking of cream cheese, this wasn’t just any old Philadelphia stuff.  Nope, this cream cheese was of the light vegetable spread variety, and came to my kitchen from the infamous Kettleman’s Bagel Company located not too far from my house.  Since I never buy bagels (I love them, but I would eat half a dozen in an hour*), I needed to find another way to use up the rest of the cream cheese.  Matt had very kindly bought it for me one morning when he went to get us bagels, back when I was sick a few weeks ago (yes, I do happen to crave bagels when I’m sick, deal with it).  What a dear he is.  I’m not 100% sure what vegetables are in said spread, but I’m thinking there were possibly peppers and carrots, as well as some unidentifiable green item.  Mystery ingredients, ftw.

Anyways, I basically built the rest of the pasta dish around everything else that I had in the fridge, including half a red pepper, two types of onion, provolone cheese, sun-dried tomatoes, spinach and a garlic-infused olive oil (the latter was not in the fridge).  Toss ’em all together and you have a sinfully delicious, heart-stoppingly creamy (possibly from all the fat) pasta dish.  So delicious.

*Almost a true story. I once bought Montreal-style bagels in Westboro and walked down the street in the middle of winter stuffing pieces of delicious warm bread into my mouth.  I went through three bagels in 20 minutes.  I am not proud of this (translation: this was the most proud moment of my life). 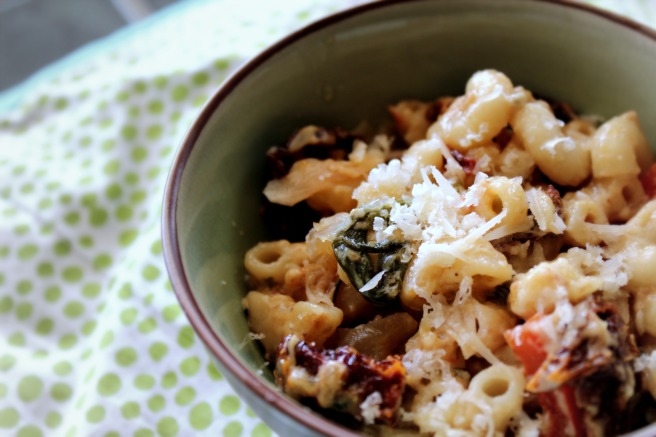 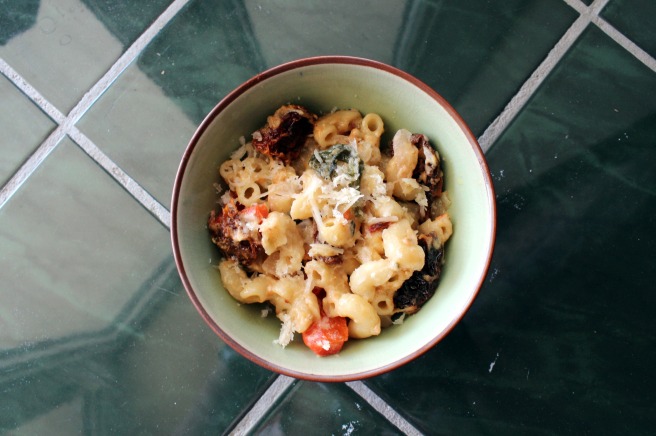 END_OF_DOCUMENT_TOKEN_TO_BE_REPLACED

Earlier this week I had the most uncontrollable pesto craving.

I don’t know what happened.  I was just sitting in the office one day when it struck me.  It was like tiny pesto gods had inception-ed my mind.

Meanwhile, in a galaxy far, far away, the zucchini gods were plotting a similar plan.

The incident occurred shortly after the pesto episode.  I had no choice.  Zucchini and pesto for supper it was.

As soon as the workday ended, I biked promptly to the nearest grocery store, eager to get these two foods in my stomach as fast as I could.  Pesto and zucchini were purchased and happiness was almost within my grasp.  I was going to buy fresh Parmesan to load on top of my pasta, before realizing that a small block cost approximately one hour’s worth of pay.  One day my cheese purchases will put me in the poorhouse, but that day has not yet come.

Aside: Let me take a quick moment to discuss a very serious health condition.  People with PSGSBS (painfully slow grocery store browsing syndrome) should be avoided at all costs.  Those stricken with this condition tend to come out immediately during post-office work hours and insist on standing in the middle of aisles, in front of the bananas, and in the baking section.  Seriously, I have no patience for grocery store pondering, and dodge the PSGSBS’ as fast as I can.  I still have my helmet on from biking, so if any of them get rabid I can escape unharmed.

Since the grocery store sold out of bowtie pasta (I saw a PSGSBS carrying three bags in her cart…), I settled on making my dish with linguine.  I had a whole pile of it lying around and decided it was time it made its dinner debut.

This was another one of those infamous “Hilary doesn’t really know what she’s doing” meals, hence the inclusion of plain yogurt in the sauce.  It was a miracle that it worked out (to be fair, a quick Google search showed that I wasn’t completely crazy.. apparently pesto and yogurt sauce is a thing).

PS: seriously, this was so good and was so fast to make!!
PPS: I am THE WORST at estimating how much pasta I need.  I made enough pasta to feed an Italian army.  There is still some in the fridge that I have been picking at for snacks.  Yes, I eat cold pasta as a snack.  Resume head shaking.
PPPS: I really love these pictures. 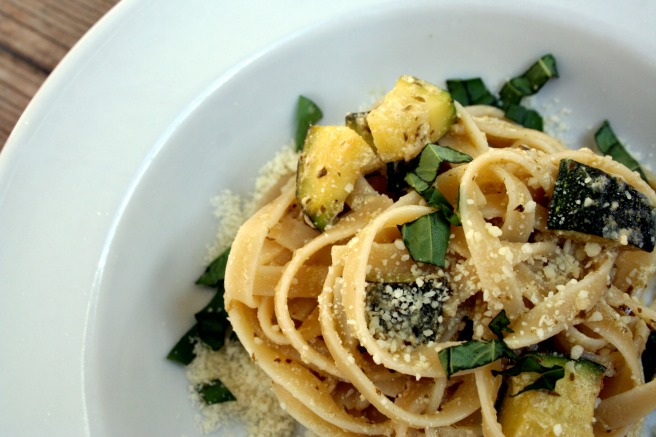 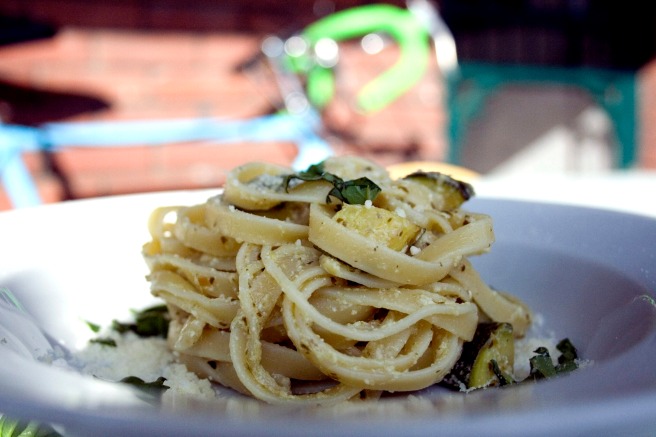 END_OF_DOCUMENT_TOKEN_TO_BE_REPLACED

My mom and dad sure have a talent for celebration co-ordination.

As you know (if you are good little sons and daughters), yesterday was mother’s day, the holiday where you are meant to wine, dine and brunch your dear ol’ mum to her heart’s content.  Also accompanying the Sunday festivities, however, was my dad’s Friday birthday.  See, celebration co-ordination, requiring a double whammy of gifts and cards galore.

The other peak of festivity in my household falls in early September, thanks to my parents having decided to get married on my mom’s birthday.  A few years ago her 50th birthday corresponded with their 20th wedding anniversary.  Guess who played grade 10 party planner?

But anyways, NBD.  It’s fun, and it means that I can hit up two holidays with one hometown return.

It also gives me a shameless excuse to make food for my family.

END_OF_DOCUMENT_TOKEN_TO_BE_REPLACED

WARNING: If you do not like copious amounts of wonderful butter, cheese and heavy cream in your main dishes, then you probably won’t enjoy this post.

For the rest of you, welcome to my incredibly satisfying, highly fattening Tuesday night supper. 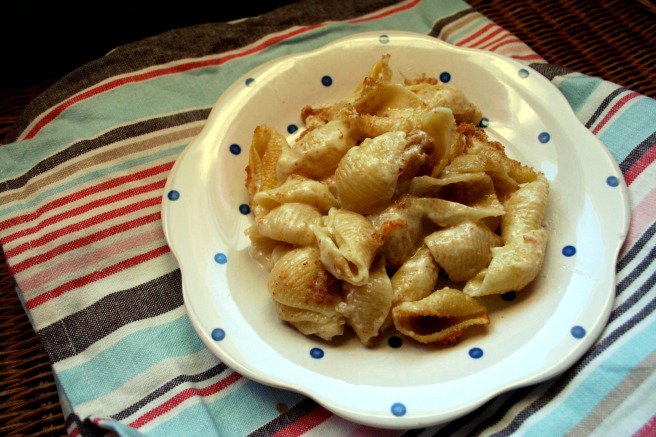 I’ve said it once, but I’ll say it again.  GRUYERE.  My GOODNESS.  How can one small ingredient wield such amazing flavours?  It’s miraculous and fantastic.  If gruyere and brie had a love child I would either marry it or eat it.

I wanted to make one main course dinner meal for my family before leaving for Ottawa this weekend.  Since I’m getting my wisdom teeth out tomorrow and will likely be unable to do anything but drool deliriously and be fed jello through a straw, I figured today was a good day to make it.  I also made dessert, which I’m scheduling to post in a few days, so stay tuned for that.

While Annie’s Eats is my absolute favourite blog for getting dessert recipes and ideas, I’d never made any of her main courses before.  I changed two little things from her original recipe.  The first was buying gruyere cheese instead of fontina cheese (I’ve never heard of this type of cheese before, what is it?!) and the second was using normal bread crumbs versus these special panko ones.  This recipe was one that I had inadvertently bookmarked on three separate occasions (sadly true, I counted), so I decided I finally had to make it.  Something that’s wonderful about cooking for your family?  Your mom buys all the ingredients.  That’s right, say hello to $15 worth of gruyere cheese!  And fresh parmesan.  Grocery shopping is a glorious experience when you’re not paying for it.

This was also just a really fast dinner to make.  At approximately 4:54 p.m. this evening, my mom strolled into the living room to find me curled up on the arm chair reading, a position which I had held for approximately five hours that day.  She informed me that supper needed to be ready for 5:30 at the very latest, since everyone would be absolutely famished.  Mission accomplished.  At around 5:27 p.m., the casserole dish of bubbling pasta was rushed up to my bedroom to be photographed.  Why my bedroom?  Well I’m the only room on the west side of the house and the winter light was fading fast.  Also, I had already prepared a mini photo studio for this meal by my window, involving a charming wicker table from the spare bedroom and an old folded apron.  ‘Nuff said.

Verdict: THIS WAS AWESOME.  So creamy.  So cheesy.  I have such a stomach ache now from mac and cheese and the dessert that shall not yet be named.  I need to fast as of 10 p.m. tonight, so it best be on a full stomach!

PS: I’m kind of really fond of these pictures.  Not so much the one of the entire casserole dish, but I love the ones of my plate.  Perhaps that wasn’t a very modest comment.  Oh well. 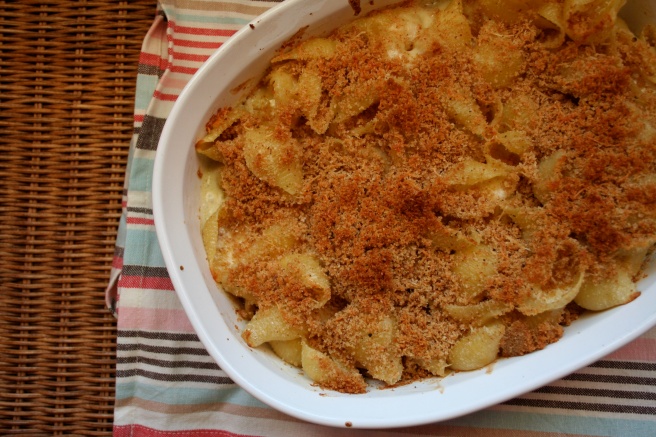 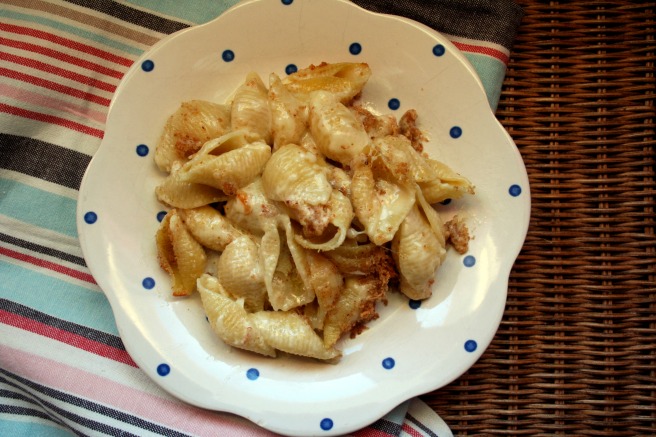 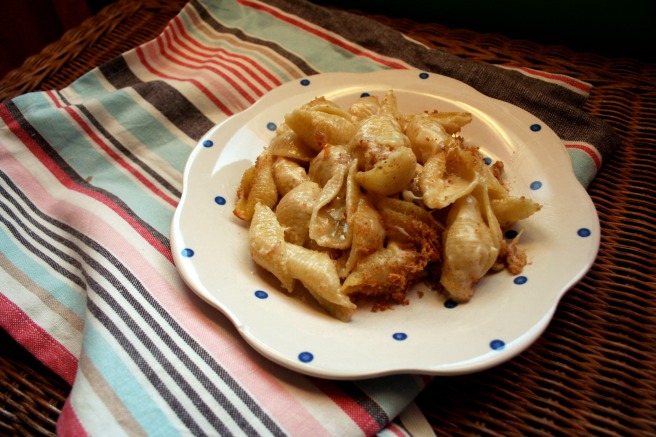 END_OF_DOCUMENT_TOKEN_TO_BE_REPLACED

This was the comment I received from three of my roommates as I cooked this pasta dish.  I blame the salami.  I for one, have never been fortunate (unfortunate?) enough to try a bagel bite, so I quickly had to google the term to find out exactly what it was.  WOW they look good.  Is there anything better than miniature pizzas?  I think not.  It looks like I’m going to need to make my own Hilary-style bagel bites sometime soon. 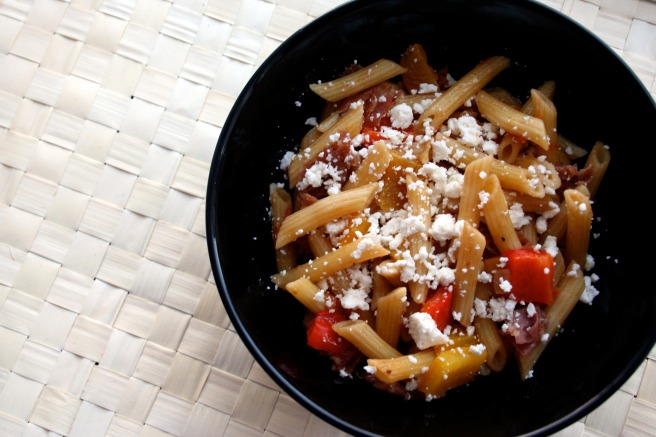 Like the chalet chicken soup I made a few posts back, this recipe came from the March issue of Canadian Living, which seems to contain several more gems that I plan on making before the actual month rolls around.  This was just a really solid dish that allowed me to use up some more of my huge pasta supply.  Also, I’ve never really tried salami before…is that sad?  Maybe my mom used to occasionally sneak it into my sandwiches when I was young, but I have never knowingly tried this famous sandwich meat.  There we are, another confession from my sad, pre-foodie life.  Buying this salami allowed me to talk to the cute boy in the deli section of the grocery store.  Score!  Also, I left out the olives from the original recipe, since no matter how hard I try, I cannot force myself to enjoy those oily little buggers.  If you are an olive lover, I admire you.  Also, this means that à la How I Met Your Mother, I need to date someone who LOVES olives.  It’s a valuable thing to know.

PS: I can’t believe I once thought that feta cheese smelled like feet.  It is my favourite now.
PPS: Isn’t that woven placemat background the best thing ever?  I bought it at IKEA for $1.
PPPS: The black bowl was also purchased during my last IKEA trip.  I seriously have SO many random dishes lying around the kitchen that I use solely to plate food.  It is a mismatched pottery paradise.
PPPPS: I brought a tupperware container of this to class the other day and had to eat it with a piece of baguette because I forgot cutlery.  Let me tell you, there are definitely worse things in life than bread utensils.

See recipe after the jump! 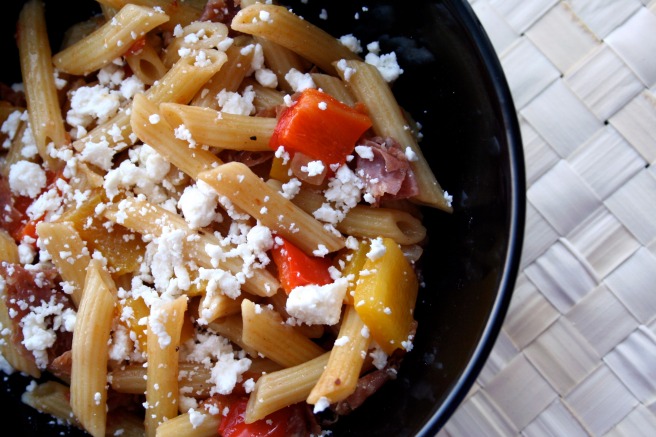 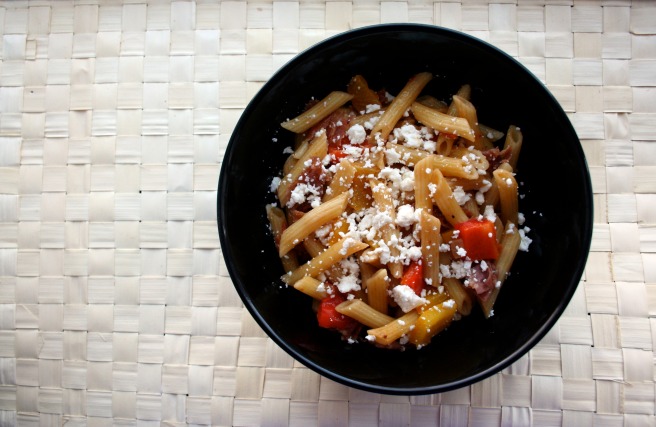