In a trip that’s been made up of daily adventures, new lessons, and wild explorations, I know that the morning of January 8 will stand out as a highlight.

The morning started off slowly. In anticipation that today’s weather would be chillier and misty, a la day of the jungle walk, Marlon and I bundled up. I walked out of our room wearing a long sleeve shirt, windbreaker, scarf, and my trusty navy cargo pants. First on the agenda for the day was to go watch elephant bath time, the daily ritual in which half a dozen elephants are scrubbed down on the shores of Sauraha’s Rapti River. We had both brought swimsuits in anticipation of having the chance to get involved in said elephant bathing, but opted to leave them off. It was winter, and we had accepted our role as passive observers in the bath time of the jungle giants.

Walking down the dirt road to the river, Marlon and I ended up behind two elephants and their mahouts (caretakers). One of the mahouts looked down at us from his cushion perch atop the elephant, and asked if we wanted to go for a ride. “Uh, OF COURSE,” we both responded, without even having to look to each other for assurance (because really, how often do you get a chance to ride on an elephant?!). 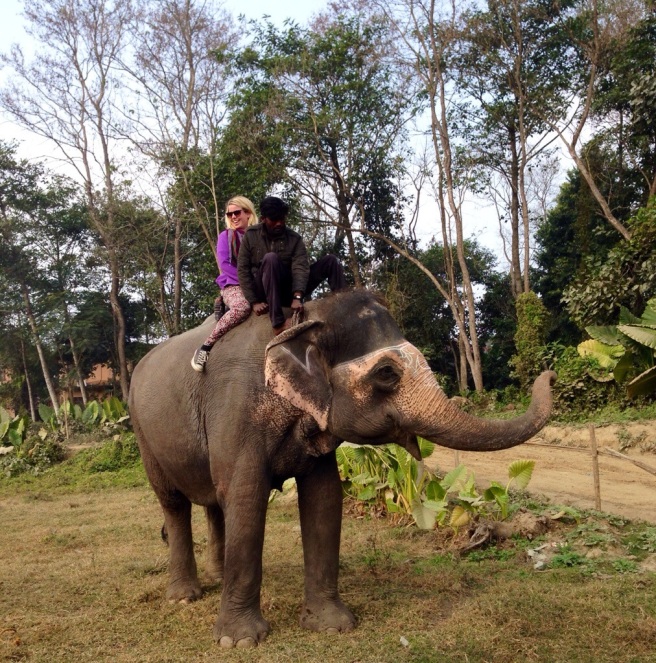 Marlon got on first, and after lifting her high into the air, the elephant continued padding her way down to the riverbank. I walked behind, documenting everything on my camera, and in turn walking through a jet stream of elephant fart that was fired in my immediate direction. Outside the release of gas, the movements of an elephant are beautiful. Seeing its muscles stretch and contract as its legs moved forward, I’m once again blown away by the phenomenal creatures that live on this planet.

Down at the beach side, Marlon hopped off, and I climbed on (a process about as ladylike as trying to get back into a kayak in the middle of a lake), grabbing onto the rope around the elephant’s neck, the one that loosely served as the rein for the mahout. I was surprised by the roughness of the elephant’s hide, thick skin like nothing I’ve ever touched before. Protruding from that skin were tiny, thin hairs, which prickled and tickled my legs. The elephant’s ears flapped against my calves.

When I got down, I was already on a first-time-on-an-elephant high. The mahout looked at Marlon and I. “Want to bathe the elephant?” he asked. This is where the brief moment of hesitation got us, considering how inappropriately dressed we were for such a job. But once again, I repeat my earlier sentiments: how often do you have the chance to ride an elephant, not to mention help bathe one? So we said yes, and threw down our purses, jackets, shoes, and cameras in anticipation for a soaking good time. Clothes dry and sand can be showered off, but the impulsive excitement of that moment is one not easily duplicated.

Marlon and I again climbed onto the elephant’s back*, and we lumbered into the shallow shores of the Rapti River. The caretaker splashed Ellie a few times, before she dropped into the water and rolled onto one side, a movement neither Marlon nor I was expecting. Down we tumbled into the warm waters of the Terai, with a splash that made us wonder how we ever thought we might get out of this experience even partially dry.

We laughed and laughed, thrilled and soaked to the bone. Climbing back on Ellie, the caretaker yelled out a phrase in Nepali, and before we knew it she had filled her trunk with water and was using some of the 40,000 muscles (!!) to send a noseful of water in our direction. I giggled like an overjoyed child, and even the constant bombardment of water couldn’t wash the smile off my face (though it tried, really, really hard). Hey, it beats coffee when it comes to waking up in the morning.

After we had our bath on the back of Ellie, she lay down in the water and we used sponges and river water to give her a proper clean off.

I’ll let the photos illustrate the rest of bath time. I need to go and check if my pants are dry yet. 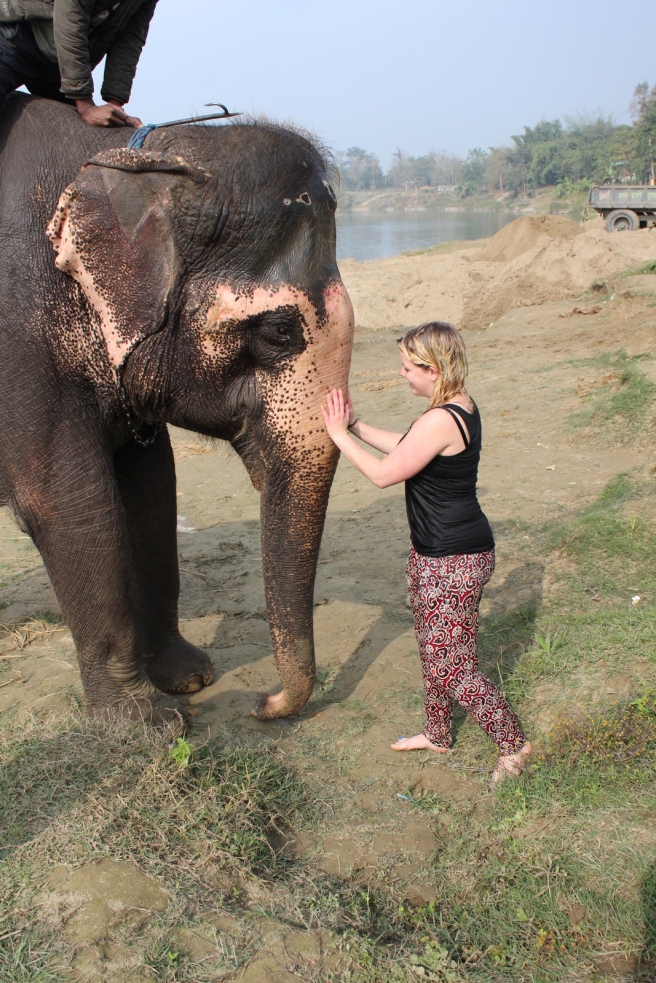 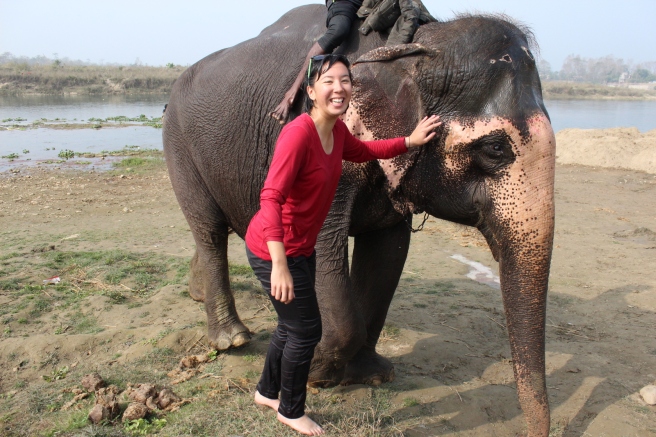 *The elephant will hereby be known as “Ellie,” as Marlon and I have begun using alliterations to name our animal friends, including (but not limited to) Sally the Salamander and Carmen the Cockroach.