There’s eating local, and then there’s buying fresh Nile Perch from the edge of Lake Victoria and carrying it 17 kilometres home, strapped to the back of a bicycle.

I’ll give you one guess as to how I spent my Saturday.

The day started as any good weekend morning should: with a bike ride out of the city and into nature.

For me, that city is currently Mwanza, the second largest urban centre in Tanzania. Located in the northwest corner of the country, closer to neighbouring Uganda, Burundi, Kenya and Rwanda than to Dar es Salaam, Mwanza is a city on the water. It’s hard to go anywhere without spotting it. Lake Victoria is Africa’s largest lake, second in the world only to our own Lake Superior. It’s immense, and its shoreline juts and pivots around the city, forming peninsulas and bays, inlets and ports.

My cycling partner in crime for the day was Gabriella, my British airbnb roommate who has been in Mwanza for six months. Gabriella has kindly been my social convenor for the past two weeks, inviting me to curry nights, trivia showdowns, birthday parties and, most importantly, on bike rides. She was kind enough to rustle up a spare mountain bike so we could embark together on a couple of weekend rides.

On this Saturday we headed north of Mwanza town and rode along the main highway until we reached the airport. Taking a left off the tarmac, we made our way down a strip of very well packed dirt, past the end of the airport runway where, if we were to return at the right moment, we would experience the sensation of being landed on by an Airbus A319 (note to self: do this).

We quickly came up on a steam roller that was compressing the grit and sand into our heavenly bike path. From there, it was all semi-loose sand, a flurry of dust and smoke whenever a construction truck, bus, or piki-piki would pass. I closed my eyes and held my breath at their approach, trying to remember not to lick my dusty lips.

Lake Victoria was a constant presence, and we were never more than 100 metres from the lake.

In her half year in Mwanza, Gabriella has explored many a bike trail around the city. Today we were bound for what she described as a clearing close to the water where you could see the fishing boats and the rocky outcrops for which Mwanza is so famous. Having been needy for nature in Dar, our final destination could have been a garbage dump. I was just happy to leave the city.

The next 10-or-so kilometres passed through the middle of rice fields and small towns. It is near the town of Igombe that the path again reaches the shore. Sure enough, there were the fishing boats bobbing gently in the calm waters, their clean painted stripes making them appear as a collection of collegiate rugby sweaters. 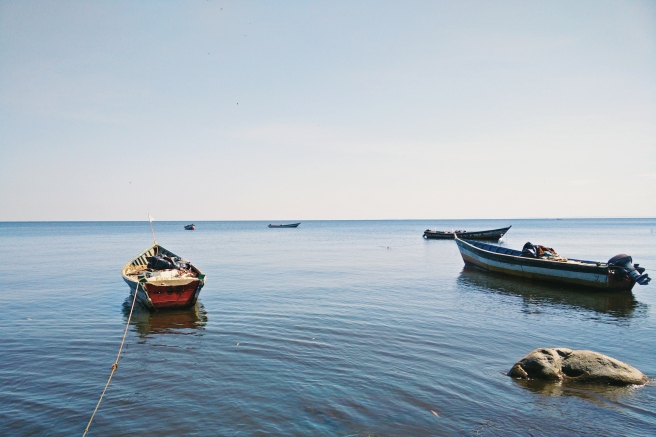 A bit further down the road were clumped bushes with blooming bright yellows, Tanzania’s equivalent of a field of sunflowers. Behind, the geological feature that pairs so nicely with Lake Victoria’s blues: black and grey granite boulders shaped round with weathering.

We were a couple of hours into our cycle and hangry-ness was approaching fast. I suggested we head back the short distance to have a Dorito break near the fishing boats, though Gabriella suggested (correctly) that we would get a lot of heckling if we were to stop for any amount of time.

That’s when we noticed the wood table set up by the shore.

Assembled on the table were three large fish – foot-long Nile Perch caught on the water that very morning. Gabriella and I approached the table, a collection of men and children following us from the road.

Perhaps it was the hungry talking or maybe it was because we knew this fish couldn’t get much fresher, but we decided we wanted roast samaki for lunch. We deliberated for 10 minutes. We had a backpack, but nothing to put the fish in. I took my buff off my wrist and stretched the length of it next to the fish. It would fit, but both the buff and the fish would be disgusting by the time we got home, accidental seasoning the result of fish sweat and human sweat and a piece of fabric satiated with dust. Gabriella had a plastic bag attached to the pannier rack on the back of her bike. We decided to go for it.

As soon as we gave word, a woman began hacking at the fish, yanking the guts and neatly tucking them into the crack of the table. The removed scales shone brightly in the morning sun. Carefully placing the fish in the bag, we wedged our precious cargo onto Gabriella’s pannier rack, hoping it wouldn’t be indented by the time we biked the 17 kilometres home. A man ripped a series of tiny holes in the bag for good measure. Fish pre-cooked in the midday heat is never a good thing.

Home we went, being oh-so-careful not to lose our lunch on any of the road’s more iffy patches.

I would say my mouth was watering, but I think it was too full of dirt. Once home, I dashed down to Kirumba Market for potatoes, peppers, carrots, and lemon.

Soon, Gabriella and I had a set up that would put Jamie Oliver to shame. We delicately lay our miraculously un-squished fish into the casserole dish and got to work chopping, slicing, juicing, and seasoning. Gabriella plucked some fresh rosemary from the garden and I tried to contain my excitement in getting to use an oven for the first time in seven months.

A lengthy bit of time later, dinner was served! The only thing better than good food is having awesome friends to share it with. Gabriella and our airbnb host, Anne, fit the bill.

There’s nothing quite like the taste of a meal you’ve cycled home.

Cycling has always made me feel free.

In Ottawa my bike is what gets me from Point A to Point B, from friend to family, grocery store to coffee shop, home to work. In travel, cycling has opened up cities for me, and I have explored Beijing, Lumbini, Copenhagen, Whitehorse, Paris, and beyond from the saddle of my bike.

Since moving to Dar a few weeks ago, the lines between home and travel have started to blend. With it, the role of cycling – which I already knew to be a key element of what makes me happy – has shifted into an even more important role.

Let’s talk about safety. During the orientation for my new job, our Country Manager was upfront with us: the way you look at security here has to be different than the way you consider it at home. Bags can get swiped by passing motorbikes, purses can be snatched off of laps while sitting in cars, pockets can be picked. As a woman, walking by yourself is not recommended, especially after dark.

Anyone who knows me knows I am independent to a fault. It’s an independence mixed with a slight invincibility complex and a desire to explore. It’s a confidence elixir that has helped me travel solo in countries around the world. As a partial introvert who loves the outdoors, I do not take well to being told I should not be outside by myself.

In Ottawa I bike for the practicality of it, for the environmental benefit, and because I just damn well love it. The satisfaction of beating public transit during rush hour can only be described as euphoric. Biking gives me freedom from traffic, freedom from relying on cars and buses, freedom from sitting still.

Here, biking gives me the freedom to.

What I mean is this: biking gives me the freedom to be outside by myself as a woman. It is an unanticipated benefit of cycling, one I could not have predicted before coming to Dar. I’ve always known biking would be an important part of my life, but I never knew it would be so essential in simply allowing me to go about my daily activity as a single 20-something female.

(By the way, anyone who thinks this “freedom from” vs. “freedom to” concept sounds familiar, here is a full disclosure: I just started reading Margaret Atwood’s The Handmaid’s Tale. She talks about this idea of “freedom from” and “freedom to” in the context of having rights taken away as a perceived means of safety and security.)

As a mzungu (white person) walking around Dar, you already get called at. You become even more of a spectacle when you’re a female mzungu on a bike. Men yell “mambo!” from the side of the road, from the back of boda bodas (motorcycles). A puckering sound is directed at you through pursed lips. Much of this is harmless, but it is still unwanted attention, unwanted attention that may be able to follow me down the road or along the beach while I walk by myself.

Biking provides me the ability to out-cycle these fears, and to escape the expectations that men may have because of the brief eye contact I offer, because of the polite smile my Canadian-ness predisposes.

But while part of this post is me discussing the role cycling has already played in equalizing my experience as a woman in a new country, part of it is also to lament and demand a change to the way women are perceived in different parts of the world.

It is not fair that I am somehow less at threat as a woman if I walk down the street with a man, no matter the capacity of that man to defend me. It reinforces the perception that women are weak, insecure, and easy, and that a man is her protector. I understand that gender roles differ by culture, but I don’t have to agree with that difference.

The past few weeks have shed light on the incredible privilege I have as a woman in Canada – a country, mind you, no less scarred by its disregard for missing and murdered Indigenous women, its continued inability for women and men to have the same salary in the workplace. Let me be clear: no country is good, while another is bad, and we have not reached the point where we can say one nation has eradicated gender inequality while others have not. It is a spectrum, and we should all be fighting to make our way to the right end of it.

Which brings me back to biking.

The other day my coworker Alex and I decided to go for a golden hour cycle in our neighbourhood. We were both wearing dresses with shorts underneath, and we were peddling at a comparable speed to traffic. As expected, we got stared at by women and men, the latter group offering a generous selection of cat calls.

Women, I’ve been told by a former Tanzanian coworker, do not bike. I am not here to say that women need to bike to be liberated, but I do want them to know that it is okay to do so, whether you’re wearing a dress or shorts and a baseball cap. I want to get so many shocked stares that this little tidbit of daily activity becomes a norm for women in Dar, not an exception.

I want women to know that biking is not just an activity for men, and that cycling can be a viable and safe way to travel in this city.

For the first time ever it’s the confidence boost I need, too.