My dad had a minor heart attack when I told him I was going to an “F” party.

Let me give you the same explanation I gave to him.

One of my colleagues, Jen, suggested a brilliant new dinner party series for the CBC/Rad-Can colleagues: letter parties. The premise is simple – each week a letter of the alphabet is chosen. Your goal as a dinner party attendee is to bring a dish that has that begins with that letter. The more words that have the letter, the better. Want to know how crazy it can get? Our first letter party featured the letter “S.” I have never seen so many strawberry spinach salads with sesame and sunflower seeds in my life.

This week, it was F’s turn. Are you feeling like we’re in an episode of Sesame Street yet?

F is a decidedly simple letter to tailor dinner and dessert around. Fruit, filet of fish, foie gras, finger foods, fennel, food for goddsake. I, however, needed an excuse to make flan. But not just any flan – a fudge flan! Double F’s for the win. Flan has a few different food meanings, but for the purpose of this blog post, please know that it is a cooked egg custard that is like an extra jiggly, not-too-sweet, half cheesecake. Read: it is awesome. 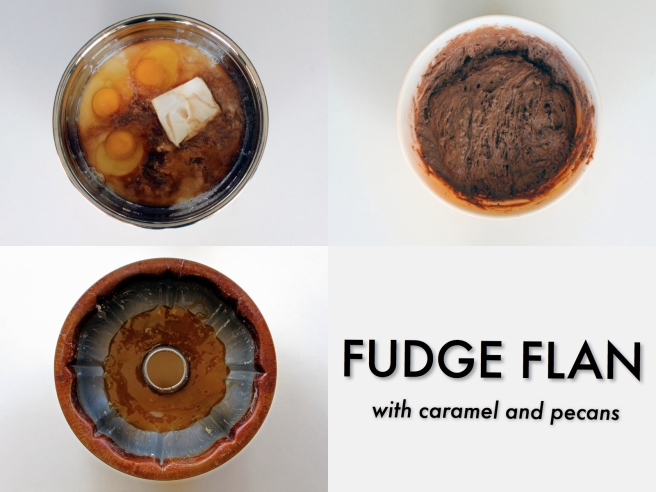 When I first saw the recipe on Tastespotting, my jaw dropped and my mouth drooled.

Making this chocolate fudge flan was a flurry of fun (see what I did there? Whether I mean to or not, the week’s chosen letter always shoves its way into my everyday conversation. I really do think my brain subconsciously looks for a way to create as many alliterations as possible).

The baking process is actually quite exciting. The cake and flan layer do a little flippity flip in the oven, with the lighter cake floating to the top and the condensed mixture sinking to the bottom.

This flan is very dense and takes its sweet time sitting in its water bath baking. I advise you to eat leftover cake batter and take sugar-induced self portraits at this time. (OKAY I’ll stop pretending it’s 2007 and I’m on Myspace)

After much breath-holding and bongo-playing on the bottom of the bundt pan, the cake came out in one piece. And that, my friends, is just Fantastic.

(but really, this was UNREAL)